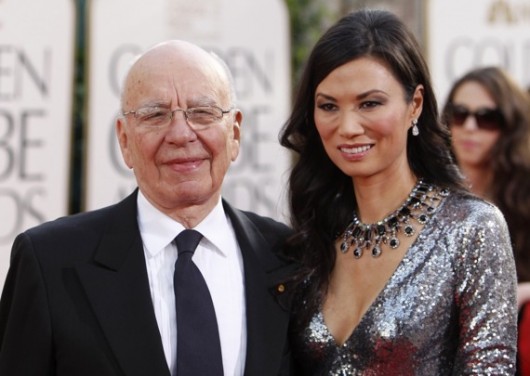 Rupert Murdoch, 82, is reportedly divorcing his wife of 14 years, the 44-year-old Chinese-born American Wendi Deng Murdoch. (Did you know Wendi’s given Chinese name was “Cultural Revolution” [邓文革]? Thanks, Wikipedia!)

The News Corp chairman and CEO filed for divorce — his third — at New York State Supreme Court on Thursday. The couple has two daughters, Grace and Chloe.

Wendi Deng will probably forever be remembered by the world at large as the woman who stood up for her man against a pie-thrower at a British parliamentary hearing in July 2011. Here she is, immortalized in GIF form:

Wendi still has the figure and the looks, and more than enough vigor, probably. She’ll be okay.

Murdoch is… old. We’d like to say he’ll be okay, too, but let’s not kid ourselves.