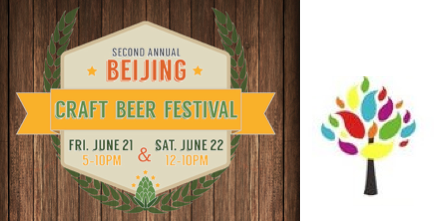 Two days ago, That’s Beijing reported that SOHO sent a message to organizers of the beer festival saying the LGBT Center was not welcome at the event because they “clashed with the architecture.” That statement was apparently “the result of one bigoted mid-level manager,” Setzer told us over email.

That mid-level manager “has been reprimanded and SOHO is in direct contact with Great Leap Brewing and the LGBT Center to show support for the event,” Setzer said.

The LGBT Center will have a tent, among the 19 or 20 official tents at the beer festival. The Center also participated in last year’s event, at which representatives distributed flyers and sold small rainbows.

Setzer sent us this statement on behalf of himself and Great Leap Brewing:

Great Leap Brewing and the LGBT Center have worked together for two years now in several events, fundraisers and collaborations. We have been working with Galaxy Soho to find a way in which everyone can work together in a productive way to make the Second Annual Beijing Craft Beer Festival a success. Unfortunately, in China there are some who are still afraid of things that they don’t understand and are insecure about the different ways that human beings find happiness in our short time on earth. The Beijing LGBT Center and most of us who call Beijing and China home understand that tolerance and harmonious society are not achieved overnight. They are also not achieved through sensationalism.

I am encouraged to see that local news media have taken an interest in the ongoing struggle that Beijing’s LGBT community has been dealing with for years. Hopefully every time the center gets evicted, intimidated and bullied our local reporters will also take notice.

We are also proud to announce that the Beijing LGBT Center will have an official tent at our beer fest.  The queer community needs good beer, not like the rest of us, but because they are “us.”

Hope everyone has a great time this weekend. Cheers.