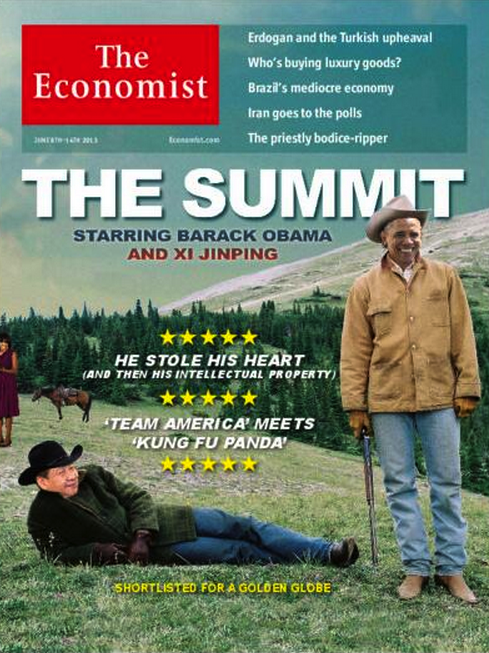 The Economist has a bizarre regional cover this week. Never mind that it’s tasteless and will surely be interpreted as homophobic by many of its critics. NEVER MIND THAT. Let me isolate the cover-line jokes for you, see if you find them funny:

He Stole His Heart
(And Then His Intellectual Property)

That’s… so bad. Team America is the name of a satirical movie that pillories the American government. Kung Fu Panda is a Hollywood film that incited Chinese protests. Neither represent the respective countries that… you know what… sigh. That’s all. Just sigh.

And the stars… they’re what a hypothetical movie critic might give, right? So they should be followed by a snippet of his/her review? Never mind that even Peter Travers wouldn’t be caught describing Xi Jinping and Barack Obama’s June 7-8 meeting at Sunnylands ranch as “Team America meets Kung Fu Panda.” NEVER MIND THAT. Where’s the third snippet, for the third line of stars?

Did these lines get left on the Economist meeting room’s rococo table?

Look, It’s A Horse!
(And She’s Dressed In Purple)

Barack And Jinping Are DTF
At Presidential Summit

Seriously, who let the intern take over? 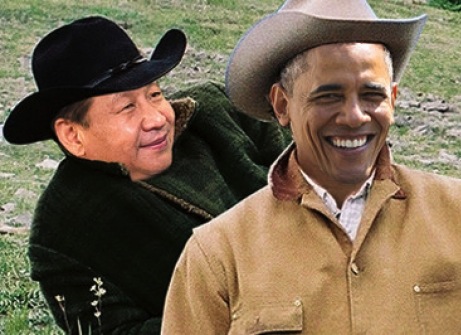 The story’s pretty good though.

POSTSCRIPT: Time Magazine has an interesting China cover this week, too, that no one is talking about thanks to the Economist.

3 Responses to “Did The Economist Really Depict Xi Jinping And Barack Obama As Gay Cowboys On Its Cover?”