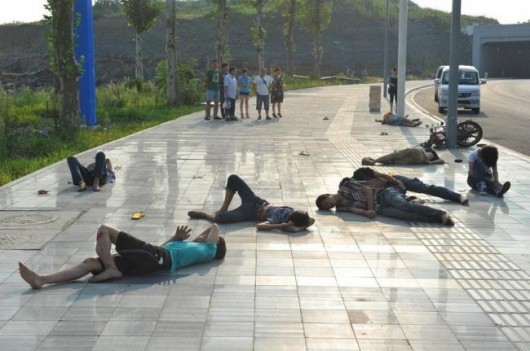 Sometimes it’s not cool to see how many people can squeeze onto the same motorbike or vehicle. Sometimes it’s dangerous, as nine young riders in Yubei, a district in Chongqing, learned recently.

On Saturday around 5 pm, nine kids, described on Sohu as “fooling around,” crammed onto the back of two bikes and raced down the street. The ensuing accident left three dead and the other six injured, scattered on the sidewalk.

(Also see: that time when five people on a motorbike got hit by a car.)

Sinopathic, which found this story, compared the scene to a modern art installation, and judging by the photo, it might as well be.

It was at a recent installation set up al fresco by the side of a road in Chongqing in which local Chinese audiences were seen to be gripped with the daring themes posed by this work.  Local residents that perchanced upon this impromptu performance were in awe of the gritty, realistic tone that evoked grand themes of mortality vs. immortality as it challenged the established orthodoxy of conservative perspectives as witnessed from the mindset of a group responsibility.

The audience was respectful and silent as they drew in the spectacle.  Immersed yet aloof from the proceedings, the audience was mindful in its role to provide the principle actors the gravitas and cultural context required for such an installation.

Be a little safer out there, everyone.

3 Dead, 6 Injured in Traffic Accident Involving Only 2 Motorcycles and No Pedestrians (Sinopathic)

One Response to “2 Bikes, 9 Riders, 3 Dead: The Definition Of A Bad Traffic Accident”