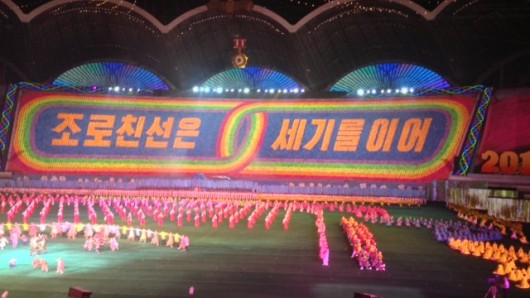 They don’t really do it small for the annual Arirang Festival in Pyongyang, so the “small twist” in the headline is somewhat of a misnomer. Nonetheless, this year’s Arirang — a.k.a. the Mass Games — that opened on Monday featured something new — a slight, possibly noteworthy change for the tea leaf readers out there — as one attendee told NK News.

The new section includes a banner that says “Russian friendship [carries on] century by century” and represents the first time North Korea has included a section specifically focusing on relations with Russia during its Mass Games.

Dr. Leonid Petrov, a researcher at Australia National University, offered some analysis on what this could mean.

“Kim Jong Un desperately needs closer links with and more developmental aid from China. The best strategy in this game would be that he use the tried and tested policy of  maintaining ‘equidistance’ from Beijing and Moscow,” Dr. Petrov explained via email.

Ah, playing one off the other, like during the Cold War era. In ingratiating itself to Moscow, Pyongyang knows Beijing will notice — and maybe treat it better as a result. (Wax statues are only a start.) A love triange to end all love triangles, this.

“The Chinese part was shortened this year, they still had the friendship section but it seemed a lot shorter. I didn’t see so much about the pandas last night,” the source told NK News after watching the inaugural show.

The show on Monday coincided with celebrations to mark the 60th year since the end of formal fighting in the Korean War.

It was, as always, one heck of an extravaganza, if the following pictures — sampled from NK News — are any indication.

(A quick note: I was fortunate enough to attend an Arirang in person two years ago, and while it’s not easy to praise anything in a country ruled by such a benighted, shitty regime such as North Korea’s, the Mass Games are nothing short of spectacular, a show that easily stands against any in the world in terms of scale and pageantry. For whatever that’s worth, of course.) 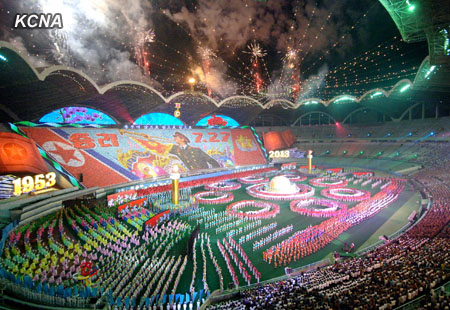 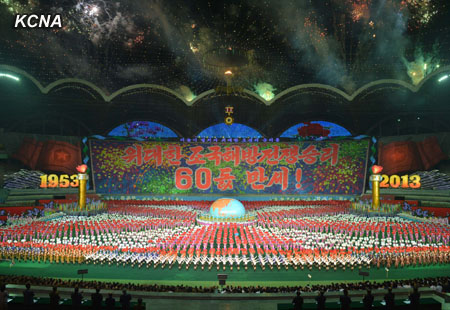 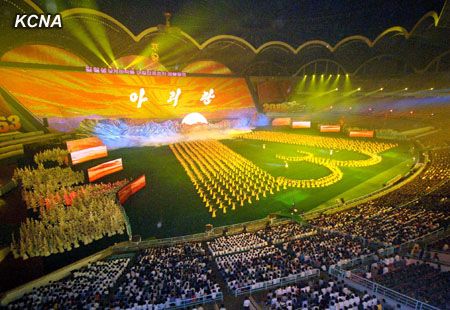