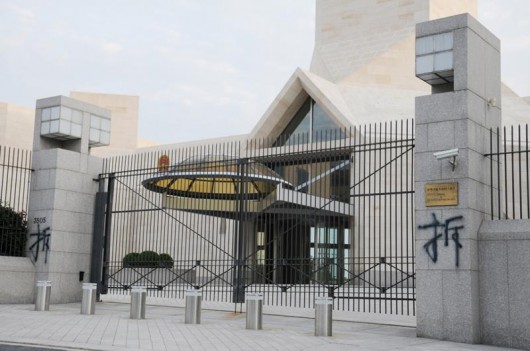 The character for demolish (or dismantle) — 拆, chai – appeared on the Chinese embassy in Washington DC on Wednesday morning. According to Voice of America, the characters appeared three times: on two of the pillars on the embassy’s front gate, and on the entrance of an office building.

This happened on the same day as the opening of the fifth annual Strategic and Economic Dialogue, a two-day session between top leaders of China and the US. Vice President Joe Biden started talks by telling China to stop hacking — “We both will benefit from an open, secure, reliable Internet. Outright cyber-enabling theft that US companies are experiencing now must be viewed as out of bounds and needs to stop” — which means you can expect the Chinese to respond by saying basically the same thing. Also on the docket is North Korea, nuclear programs, trade, investment, climate change, the usual.

No group has claimed responsibility for the graffiti, but Initiatives for China sure seems proud of it. They write:

Citizen Power for China, also known as Initiatives for China, has recently launched a campaign, code named the Sparrow Initiative (2nd stage), to defend land rights of the Chinese people and obtain justice for the victims of  China’s violent dismantling and forced eviction activities. We believe everyone deserves to have a home, even a sparrow–. Any brutal action in taking that basic right away from the Chinese people is absolutely unacceptable.

The organization’s founder, Yang Jianli, told Voice of America, “People widely believe the graffiti on the Chinese embassy in the US is in support of the Sparrow Initiative.”

If you say so.

@austinramzy Rather see US Embassy in Beijing get 拆'd. One of the ugliest, least-welcoming buildings in a city that sets a pretty high bar.