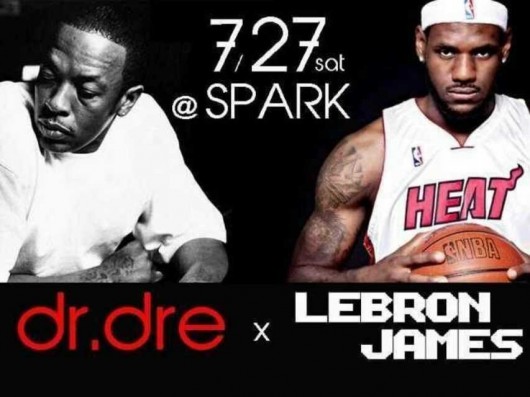 The hottest ticket in town will be the one to see Dr. Dre and LeBron James at Spark this Saturday. How do you get tickets? No idea. They’re probably not going to be publicly available. (Maybe. Who knows.) But there are giveaways and such on the table, beginning with the one advertised by That’s Beijing, who’s got itself quite the bona fide expat-mag scoop…

“In cooperation with SPARK Beijing we have a few free passes to this epic invitation-only party for That’s readers,” so goes the report. “For a chance to win, follow @thats_beijing on Twitter before July 26 and tell us what Dre will like most about China.”

We’ll post other giveaway information and relevant deets when we get them.

If you want to be in the same room as some famous people, keep an eye on the Beats by Dre weibo. They’re trickling out VIP tickets and other lux prizes, like a chance to personally ask Dr. Dre a question, in real life. A few days ago they had this one, offering a chance to win tickets by answering the question: “If you were on a deserted island and you could only have one friend and one Beats by Dre product with you, who/what would they be?” I said “My girlfriend and why the fuck would I need a pair of headphones on a desert island” but I did not hear back. Maybe you will have better luck!

5 Responses to “Dr. Dre And LeBron James Will Be At Spark In Beijing On July 27”