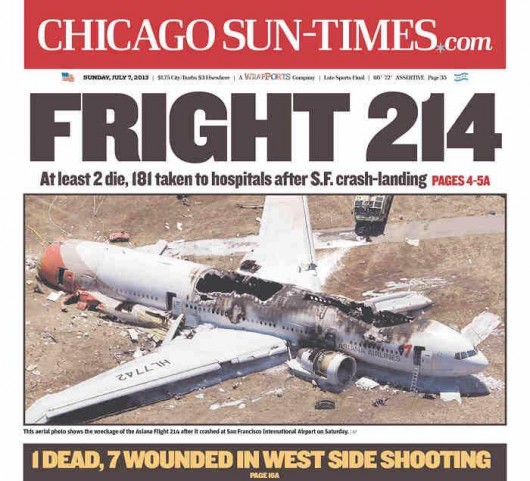 Okay, this looks bad — replacing an L with an R in a story about a flight from Asia in which two Chinese teenagers died. But no editor could have possibly done this intentionally, right? Make an L-R confusion joke amid a tragedy, I mean. Spoonerisms really aren’t even very clever.

In any case, expect an apology soon. We’ll give the Sun-Times the benefit of the doubt and call “Fright 214” an error in carelessness, but it’s an error they’ll regret nonetheless.

Sun-Times Publisher and Editor-in-Chief Jim Kirk told the Asian American Journalist Association that his staff didn’t even think about how the headline could be perceived as insensitive.

“There was nothing intentional on our part to play off any stereotypes. …If anybody was offended by that, we are sorry,” Kirk told AAJA. “We were trying to convey the obviously frightening situation of that landing.”