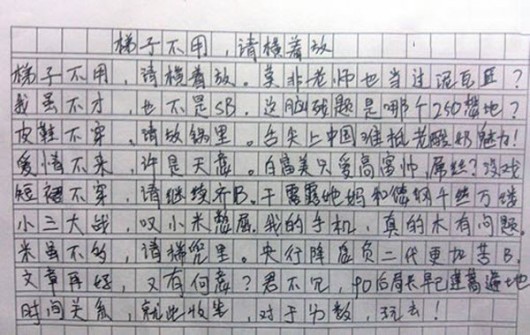 Please take a look at the work of one Sichuan student who dared to provide an honest, original answer to a question about “Chinese equilibrium.” As translated by chinaSMACK, the answer begins:

When I saw this essay prompt, I suddenly felt an urge to laugh. Yes, that’s right; I wanted to laugh. It’s as if I could see the deathly grim face of the grader through this piece of test paper.

Does he have your attention, test-grader?

When the second-generation rich drive their sports cars, flowers in hand, into school campuses chasing after chicks, when the exhaust of the sports car roars and blows into my face, I think, why isn’t my dad Li Gang? This kind of cynicism spread through my body, and made me dispirited and downcast. But then, the feats of Guo Meimei reinvigorated me. When there isn’t a biological father to rely on, there’s always someone called a “godfather” ["sugar daddy"]. Unfortunately, godfathers don’t take on godsons.

You get the idea. Perhaps intimidated by this high schooler — displaying more critical thinking in one paragraph than most Chinese students over a dozen years — the grader gave this a 0. Better to deal with those who break ranks by barring them from rejoining the ranks.

What is it that gaokao tests again? Obedience?

When we posted sample gaokao questions last month, we noted that “you have to train yourself to be the perfect little tool to score well on them.” The converse is true as well, it seems: if you elect not to be a trained seal, you’ll get the cudgel. A perfect little zero. And China still wonders why it doesn’t have innovators, specifically its own Steve Jobs? Newsflash, guys: there is a Steve Jobs somewhere in China, because there are 1.3 billion people here, and so by mere probability, there should be at least a handful of creative, success-driven, ambitious individuals who can change the world. You’ll never find them, of course, because the Chinese school system smothers this country’s future, one fact, one historical fib at a time. If Steve Jobs had gone to school in China, he would have, if lucky, found an entry-level position with Microsoft.

Although there is reason to be heartened. This kid’s essay made news, didn’t it? “Perhaps most tellingly,” reports the Economist, “the online response to such essays as these is overwhelmingly positive. Many of the posted comments say the individual efforts should be marked high for creativity.” Hopefully — and this is a long shot, but dream with me — fame and the feeling of doing honest intellectual work will make the test-taker feel like his or her effort was worth it.