In the heart of southwest China’s Sichuan province, the world’s largest building stands as testament to modern engineering and unrealized ambitions. Text and pictures by Hannah Lincoln 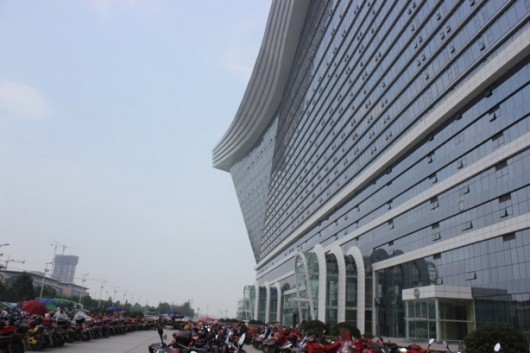 The biggest building in the world recently opened in Chengdu, China. The New Century Global Center’s colossal undulating roof, which I’d been eyeing from my apartment window these past few months, is visible from any high point in the city. I hadn’t known what it was until last week, when relatives informed me through a flurry of news articles that it was part of a 1.7 million square-meter complex that is nearly the size of Monaco, and has an artificial sun.

So I saddled up my scooter and took my camera for a ride down south, halfway to the airport, where Renmin South Road stretches into an empty boulevard. One building out-sized the next until finally I reached the climax of the strip-mall crescendo. I circled half the building before finding an entrance. 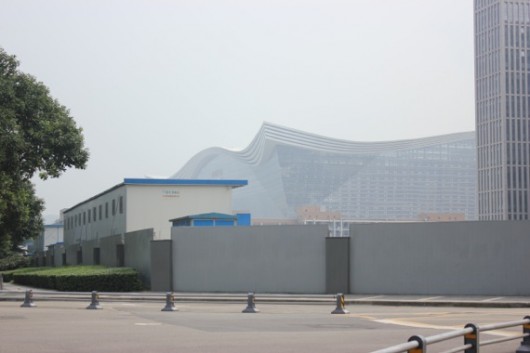 From about 300 meters away, the new Global Center fades under a midday mist. Photo also in black and white below — the pollution allows about as much visibility in color as in monochrome. 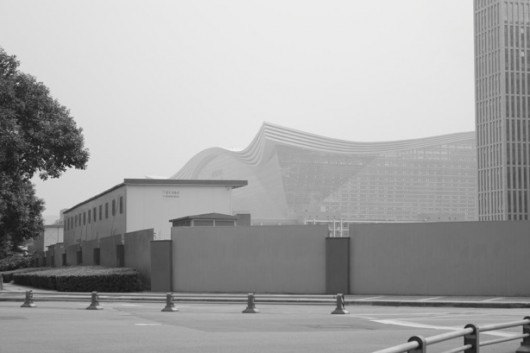 Five fatigues-clad men watched me from their surveillance booth as I parked my bike nearby. “Do I need to take an ID number?” I asked.

“No,” one said, “but you can’t park there. Your bike will get stolen.”

“Then where should I park?”

He pointed to a spot about ten meters away, his official surveillance area.

“You mean to say that if you saw a thief take my bike, you wouldn’t do anything?”

“That’s right,” he smiled proudly, and his friends giggled.

I started to unlock my bike. “Aren’t you supposed to act on the people’s behalf?” (“为人民服务,” a slogan in all police stations, city halls, and military zones.)

They chuckled some more while I moved my bike to the anti-thievery zone. As I walked away, a manager chased me down to give me an ID number.

In Medieval times, European cathedrals were built to inspire awe. For a peasant cresting a hill and seeing a cathedral for the first time, it would have been an eye-opening, postively beatific moment.

I admit I felt a little of that while walking under the tin eaves of this building, but the awe was tinged with discomfort rather than admiration. Blank stares from behind service counters followed me as I entered two different doors that led to empty, unfinished offices. After realizing that more than half the building was unoccupied, I trekked to the front of the building to start my walk-through.

I’ve included a series of photos to share the prominent features of this complex — the elements that seem to define it. I’ve never enjoyed going to the mall, even in the US, but the Global Center left me particularly depressed. Rather than displaying China’s new wealth, it was a hollow projection of what commercial developers think wealth should be: big, gaudy, and gold: 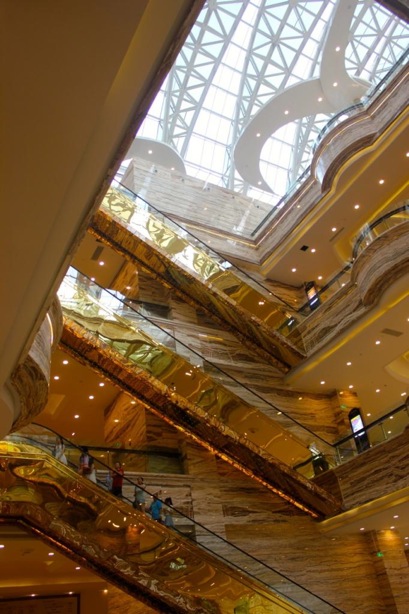 It’s a pseudo-Victorian, faux-antique, ultra-Western look. It is this style that has come to define modern China, a knock-off of actual taste. Within this colossal structure, there was not a single trace of Chinese tradition. 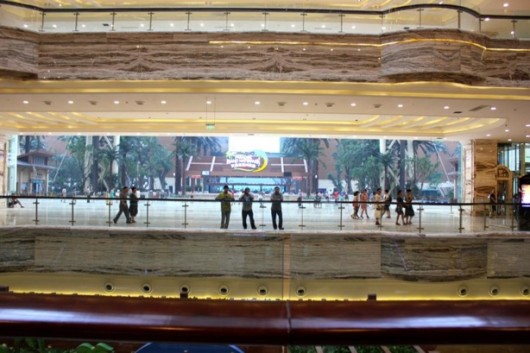 If Hogwarts were to sell its castle to commercial developers, its entrance would be like this, with escalators illuminated with indigo lights and strapped to reflective metal sheets criss-crossing from floor to ceiling. Here, the mall is full of people, with benches crowded with grandparents who have brought their grandchildren to toddle around the marble floor. It’s a public park: a space to sit and watch. 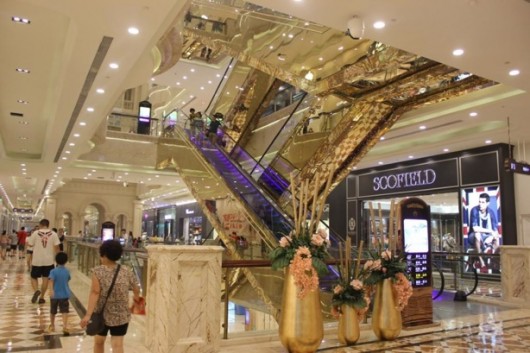 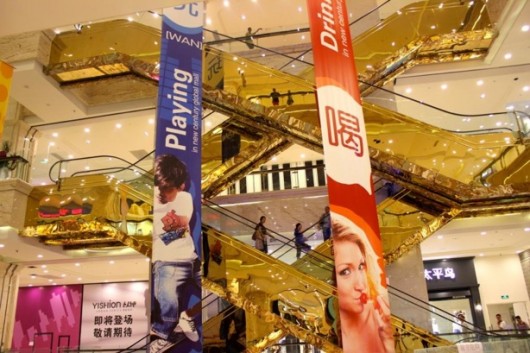 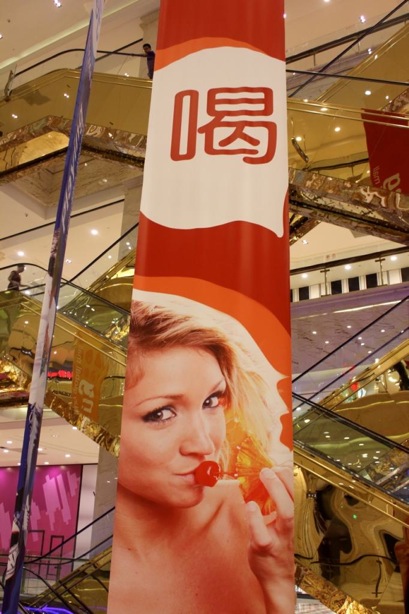 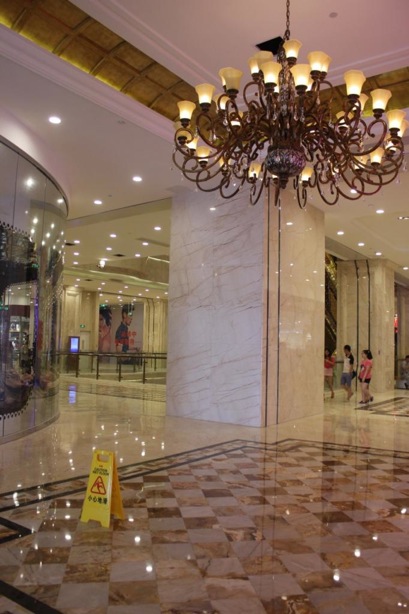 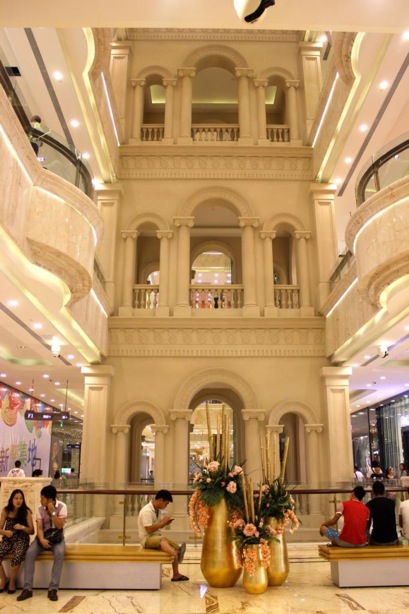 Down a side wing stands a four-story bell tower (of sorts): ionic columns supporting a clock that is set to the wrong time. A closer look revealed that this structure is plastered with a cheap, grainy cement made to look like real stone. It is already chipping in several places.

Nearby, a double-door set stands inexplicably in the middle of the corridor: 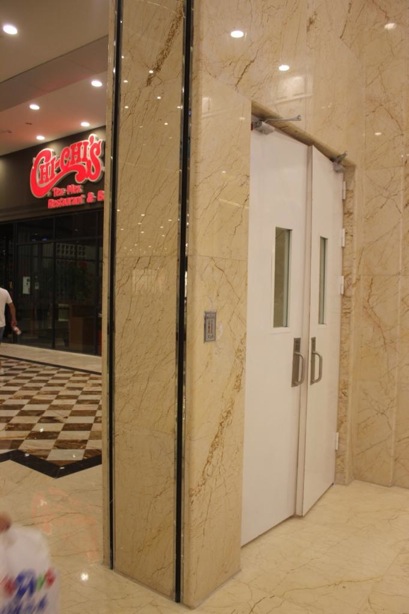 While Donald and Daphne Duck greet shoppers at an electronics store, banners display sexy foreign women nearing orgasm as they bite cake and sip margaritas. 吃 says one banner, 喝 says another — “EAT” and “DRINK.” Do not forget to consume. 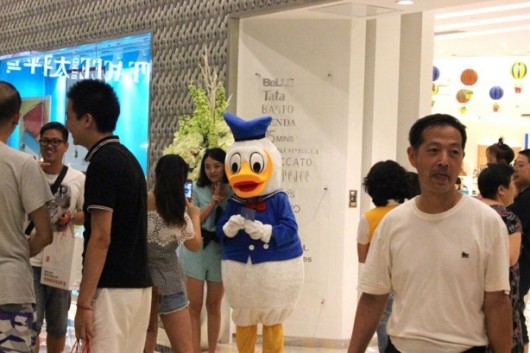 And now, some stores, including faux antique cafes and empty boutiques. A sparkling white cafe is decorated with more plastic shiny things that hang. A foreign woman’s face, this one cartoonish, casts a bashful glance on a wide column, reminiscent of the Starbucks mermaid. Faux-antique chairs and tables sit mostly empty in this massive cafe. 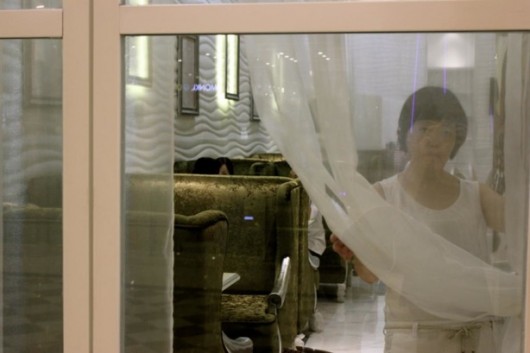 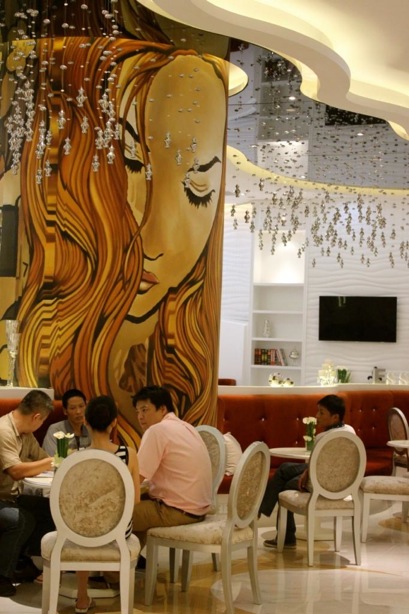 Expensive boutique clothing stores are guarded by uniformed workers. One store sells only black and white clothing. All are empty. 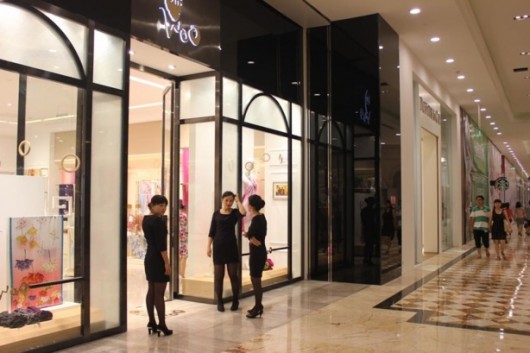 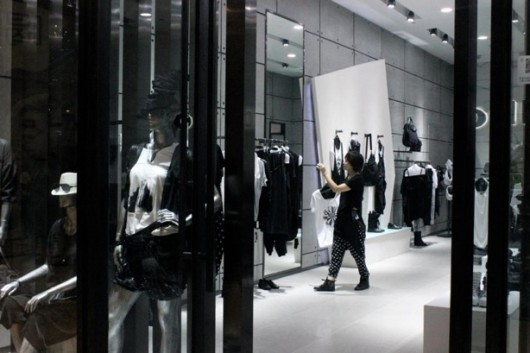 Finally, everyone who has heard of the Global Center know that it has an indoor beach. The Waterpark is currently open to the public, but its facilities are inaccessible. The beach has no sand, and the rumored “artificial sun” was nowhere to be seen, save for the massive glass ceiling that reflected the painful glare of the pure white sky. Pollution was visible within this massive room, obscuring the view of the unopened water slides at one end. 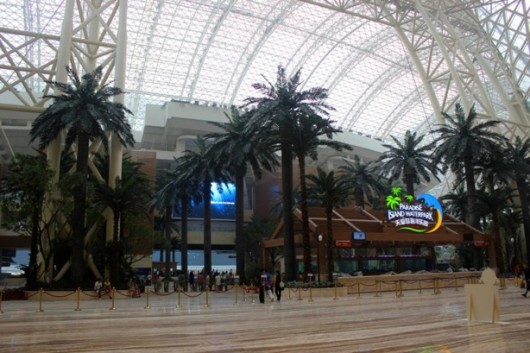 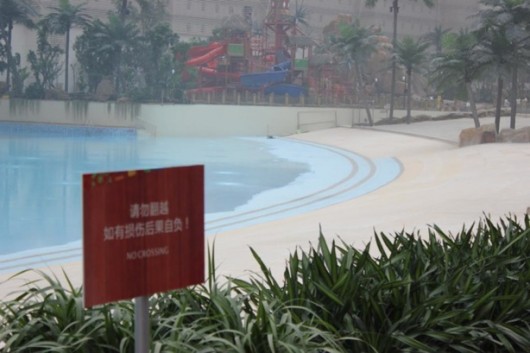 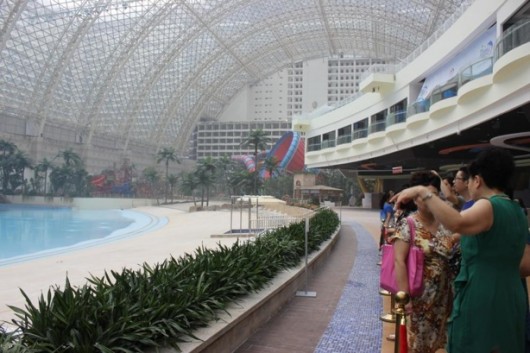 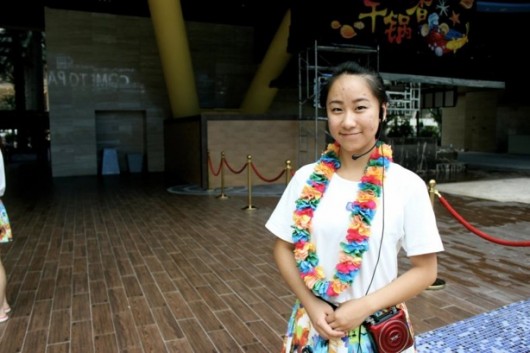 Finally outside again, the nebulous Sichuan sun glowered overhead as I hustled across the shadeless, endless parking lot. The bike lot was littered with pot holes and encased in a rusted iron fence — the Victorian touch had not yet spread to the mall’s far-flung properties. The five men in fatigues giggled again when they saw me approaching. Rather than being annoyed this time, I felt a touch of humanity, as if they were saying, “Welcome back to the real world, did you have a good time in there?”

The experience hung as heavy as the approaching thunderstorm clouds on my ride home. The New Century Global Center remains mostly empty, save for the front corridors, which are hollow in their own right. Questions abound: why create such a place? To what avail? Who will open businesses here, and who will visit? It’s a historic building that China has erected — the largest in the world by volume, engulfing the light of the sun — but it was done quietly, without fanfare, seemingly overnight. Is it a monument to hubris, or humility? Perhaps that’s a question for historians to answer — if this building isn’t, before long, relegated to the darker annals of history.

10 Responses to “A Modern Colossus Holds The Sun: Inside The World’s Largest Building In Chengdu”