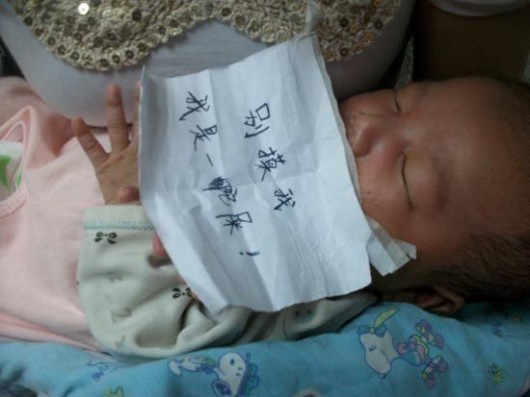 Although, as chinaSMACK explains (via iFeng), the nurse who did this was kinda shitty:

On the afternoon of June 8, at about 4pm, Hao Hao started to cry constantly, and symptoms such as twitching, vomiting, and inability to control urination and defecation began to emerge. He was taken to the newborn ICU for treatment, and was diagnosed with intracranial hemorrhaging and subarachnoid hemorrhaging. According to Hao Hao’s father Mr. Zhou, these symptoms started to happen after a nurse had given the baby an injection. However, the nurse on duty then denied she had ever given the baby any injection, but the woman in the bed next to Ms. Tang’s bed testified: “I saw with my own eyes the nurse giving the baby an injection.”

That a situation like this happened, the baby’s family got very angry. Because the two parties couldn’t reach an agreement, one month later, this matter was still not settled. During the process of resolving this dispute, on the noon of July 4, Ms. Tang went to see Hao Hao, who was staying in the ward on the 8th floor of the City Maternity and Child Care Center, but what she saw greatly shocked her: A slip of paper was attached to Hao Hao’s face with two pieces of tape, on which it was written: “Don’t touch me, I’m a lump of shit”. She couldn’t accept her baby being humiliated like this and burst into tears.