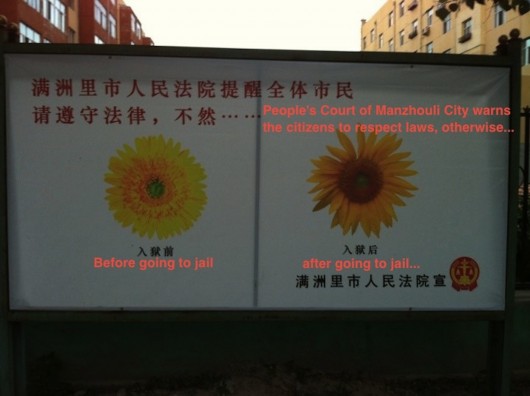 The above sign appeared in front of a court in Manzhouli, Inner Mongolia recently. As interpreted (and translated) by Ministry of Tofu, it’s a not-so-subtle warning to the citizens of the city to behave, or else your anus will look like a puckered, withered flower.

To give you a bit of context here, “daisy” and “chrysanthemum” in Chinese internet language are slangs for anus, for Chinese online masses do believe the two flower species look similar to the human anatomical part. With that in mind, if you look back at this poster, you would probably associate the shriveled sunflower with some physical damages done to it.

SCMP reports that a Manzhouli spokesperson confirmed on Saturday that the sign has since been removed. You won’t be surprised to learn that it drew widespread mockery and derision from the online masses.

“The court [poster's] original intention was to warn people away from prison because [imprisonment] takes away one’s best years of his life, like a fading flower,” he wrote in the comment.

One Response to “Obey The Law If You Don’t Want To Be Prison Raped, Implies Government Signboard”