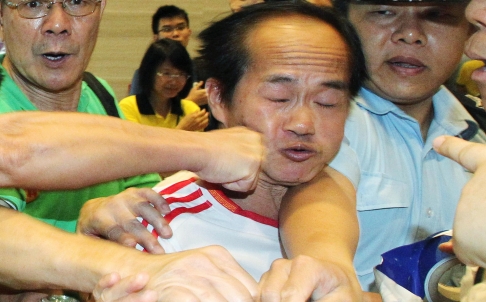 Democracy advocates in Hong Kong clashed with a pro-Beijing group on Sunday at a public forum, renewing a personal curiosity of mine over whether that city has ever held a political public forum that hasn’t devolved into a shouting match with histrionics only monkeys could enjoy.

But we digress. The above picture. That.

A member of Caring Hong Kong Power, the pro-Beijing group, was punched, according to SCMP, which took the photo. The other side suffered injuries as well.

Scholarism member Oscar Lai Man-lok, 19, was taken to hospital after being kicked in the fracas. Police are looking for his attacker, a man thought to be aged 30 to 40. They were called to the scene to handle an assault case at about 5pm. No arrests were made.

One of the forum hosts, Dominic Lee Tsz-king, said he saw a Caring Hong Kong Power supporter kicking Lai. He added that he had been punched in the head himself several times.