It happens every year, but the algal bloom in the Yellow Sea near Qingdao, Shandong province has been historically large this year, according to the Guardian. “This year’s incident has swathed 28,900 sq km (11,158 sq miles), twice as much as the previous biggest bloom in 2008,” in fact, leading officials to use bulldozers to remove 7,335 tons of this green stuff from beaches.

Indications are that pollution may have played a factor in the record-setting growth. The Guardian again:

“Algal blooms often follow a massive discharge of phosphates or nitrates into the water. Whether it’s farming, untreated sewage or some kind of industrial plant that is discharging waste into the water,” she said.

The recent explosion of the algae pointed to a dramatic change in the ecosystem which was probably not natural.

ITN, which produced the above video, reports:

A carpet of green algae has covered miles of the Chinese coastline leading to a major clean-up. The deluge, known as an algal bloom, happens when the temperature of the sea off Shandong province, rises to between 20 to 25 degrees Celsius. State broadcaster CCTV says it has occured for the last seven years and this year stretches all the way to Jiangsu province.

And yes, people have been swimming in it. Gross. 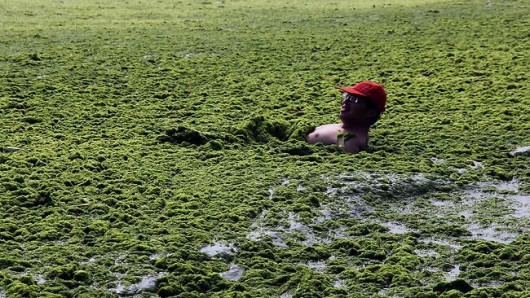