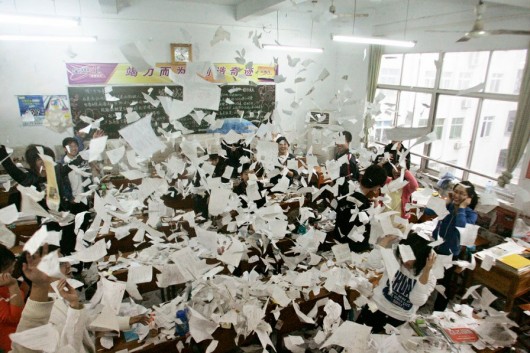 This story via Global Times:

The father of a 13-year-old boy who has been found safe this week after running away from home due to scoring poorly on his third gaokao (or national college entrance examination) attempt said that he regrets pushing his son so hard.

Okay, so the good news is the boy is safe. But… he’s 13. Why is he taking national college entrance exams?

The young boy, Zhang Zhe, who was considered a genius before the age of just 10, when he took his first gaokao, was discovered at a friend’s place by his aunt on Monday, the boy’s father, Zhang Jun, told the Global Times on Tuesday.

He has failed his last two gaokao attempts, because he’s 13, and gaokao is notoriously fucking insane.

The young Zhang disappeared Friday, fearing that his repeated gaokao disappointments only served him to be a great “burden” for his father.

Each test costs 7,000 yuan. That would buy about 300 soccer balls, which would serve his young child about 300 times better at his current stage in life.

Zhang’s father said that he never meant to make his son feel so overwhelmed.

“He had outstanding talent, and I believed that he would be able to achieve things that other children could not,” said Zhang’s father.

Like fail a gaokao test multiple times. Other children could not do that, because their fathers aren’t crazy.