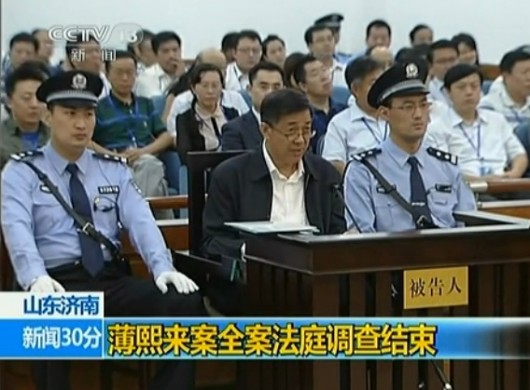 The trial of Bo Xilai lasted three days longer than it was supposed to, but it’s all over now except for the sentencing. Until then, here are some links to bring you up to speed.

Denies covering up wife’s crime. “Ousted senior Chinese politician Bo Xilai admitted to shaming his country and poorly handling a defection attempt by his former police chief after he told Bo his wife had committed murder, but Bo denied trying to protect her from the accusation.” (Reuters)

Now we’re getting interesting. “Mr Bo’s corruption trial began on Thursday as high political drama, revealing the oily wheels and cogs of Communist party rule. But it has evolved into a family reality show, complete with sex, murder and deception. // As the trial dragged into its unscheduled third day on Saturday, a still defiant Mr Bo painted a picture of a dysfunctional household, in which his wife rarely spoke to him and was keen to rely on him as little as possible. // But in what may eventually prove to be his undoing, he also said he took responsibility for the fact that £500,000 of public money had somehow made its way into his wife’s account.” (Malcolm Moore, The Telegraph)

Denounces Wang Lijun. “Ousted senior Chinese politician Bo Xilai angrily denounced his former police chief on Sunday on the fourth day of his trial, calling him a ‘vile character’ who faked testimony implicating Bo in covering up a murder committed by his wife. // …On Sunday, Bo rebutted earlier testimony from his former police chief, Wang Lijun, who carried out Bo’s crackdown on crime and gangs in Chongqing, where Bo was Communist Party chief.” (Reuters)

No place for sentiment. “Chinese prosecutors demanded a heavy sentence for ousted top politician Bo Xilai as his divisive, dramatic trial ended on Monday, saying his ‘whimsical’ challenge to charges of bribery, graft and abuse of power flew in the face of the evidence.” (SCMP)

Just the guy we wanted to hear from. “I don’t want to discuss what crime Bo committed–that is up to the court to decide. I just want to say that your subordinate Wang Lijun caused such a stir, and that your wife killed a man. By being drawn into these big scandals, you have already seriously defamed the Party and the government. We low-level Party members work with all our might, but we cannot counterbalance the havoc wrought from the top by someone like you. I hope that no matter how the court judges you, your final statement will be a sincere apology to the people and the Party.” (China Digital Times)

You mean they’d do such a thing, in this country? “But given the limited access, it has been hard to tell how accurate an account the public is getting in Mr. Bo’s trial on corruption and abuse of power charges. On Sunday, the court transcript appeared to show some filtering of the proceedings.” (WSJ)

No wonder Bo Guagua was so popular. “Having spent many of his formative years abroad, Bo is a high-end frequent flyer, shuttling between China, Britain and the US at least three times a year. // He loves to travel, and has visited Venice, Argentina, Cuba, Paris and Africa, and Germany in 2006 for the soccer World Cup. // As a loyal friend, he generously covered the air fares for his friends, mainly foreigners, who were put up at the Grand Hyatt hotel, Fairmont Beijing and other five-star hotels when visiting the capital.” (SCMP)

You know that really tall officer accompanying Bo Xilai? “At least one of the two police officers accompanying Bo in court may be a professional basketball player who is 2.02 meters tall (about 6 foot 6 inches). His name is Gong Xiaobin. Anyone familiar with Chinese basketball in the 90s should know his name. A Shandong native, Gong used to play at Chinese national basketball team and was once voted a national star player. He is now the coach of Shandong basketball team. There is no confirmation or whatsoever, but Gong does look quite like the police officer standing on the left side of Bo.” (Offbeat China)

#BoXilai "I know I'm not perfect, I'm of subjectivism and I have a short temper“

"I have made serious mistakes, and I'm deeply aware of my poor regulation over my family, which has imposed bad impact to the country" #Bo

Every time I met Bo Xilai he alluded to the fact that he was 20 years older than me and asked me to call him uncle. #TrueStory

“How Bo Xilai might emerge as a Latter Day Confucian Hero.” (The Useless Tree)

“You must remember this: Bo Xilai cared nothing for fair trials in China until he found himself in the dock.” (China Policy Institute Blog, The University of Nottingham)

“Bo Xilai: A Poor Test of Rule of Law in China.” (China Power, The Diplomat)