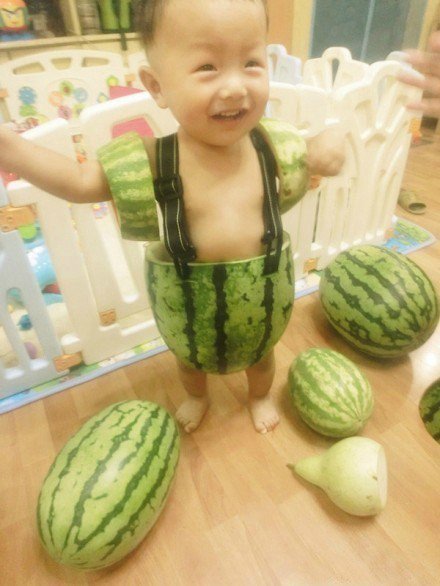 Another watermelon boy, via China Navis – or is it the same boy?

Links! Pete DeMola will be by with an Outro in a couple of hours.

Apologies to My Censor review. “For those unfamiliar, the fact that Moxley’s book focuses solely on his own personal ups and downs, and not those of the 1.3 billion people around him, should give some indication to the caliber of Moxley’s journalism. His is not the hard-hitting exposes, or the sprawling long-form panorama. Rather, Moxley made his name ‘chasing the rabbit down the rabbit hole,’ and sending up the everyday absurdities of the China expat life itself, including writing about being a ‘Rent a White Guy,’ and trying to make it in Chollywood – the Chinese film industry.” (Nick Skidmore, the Beijinger)

Eeek. “Life imitated art, startlingly and crudely, in the city of Hai’an, north of Shanghai, when two men rushed the stage and groped the painter and performance artist Yan Yinhong as she danced ‘One Person’s Battlefield’ — her furious comment on sexual violence against women. // The assault continued through her entire performance as she dodged the men who kissed and groped her, grappled her to the floor and thrust their hands up her skirt, the audience making only halfhearted efforts to help as they stood by and recorded the incident with phones and cameras.” (NY Times)

Interview with Beijing State of Mind‘s Andrew Dougherty: “Who are your rap idols? // Jay-Z. He’s fun and has great style. Snoop Lion, Kanye West and Eminem are also great talents and have contributed much as artists in the rap industry.” (The World of Chinese)

And an eep. “From homicidal testicle squeezing to all out penis chomping it seems that male genitalia is not just not safe in China. On August 3 a man, surnamed Tang, was admitted to the Luzhi Suzhou City People’s Hospital emergency room with a missing testicle, Modern Express reports. // …On August 2, after another argument with his wife. Tang grabbed a razor and cut off one of his testicles (that’ll show her).” (Shanghaiist)

Ha. “Three men who ran a ‘barber shop’ in Foshan are demanding RMB300,000 in compensation from the state after it was ruled in June that happy-ending massages don’t amount to prostitution. They were jailed in 2011 when their establishment was found offering the service. Nanhai Court will reach a decision today, Dayang reports.” (The Nanfang)

Suspected this would happen. “Last week this blog noted that the state-sponsored Global Times had published an article entitled ‘Hackers, Bloggers and Professors Team Up to Tap into Blocked Microblog Content’… That article, which was originally available here - http://www.globaltimes.cn/content/799621.shtml - has been deleted. The following video shows what happens when a user tried to access the article on August 2.” (Fei Chang Dao)

Poor guy. “The man who infamously took out all his worldly frustrations on a Kunming airport kiosk has been sentenced to jail time. Yan Linkun (严林昆), formerly a county adviser in Qujing (曲靖), received a six-month prison sentence yesterday from magistrates in the Guandu District People’s Court of Kunming.” (Go Kunming)

I wrote this week about why so many flights are delayed in China: http://t.co/K149DrrvgG Free advice: Take 1st flight of day when possible.

Do not watch this film, do other things interlude, via Amnesty International:

“Child rape victim locked away as accused rapist walks.” (Out of My Face)

So hot, people would rather sit in an AC’ed subway station in Shanghai, via Shanghaiist: 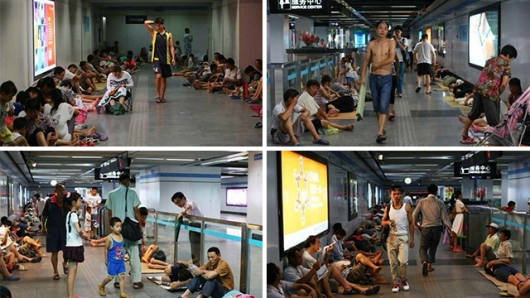 5 Responses to “Friday Links: Interview with Beijing State of Mind co-creator, review of Apologies to My Censor, and an audacious case of sexual abuse”