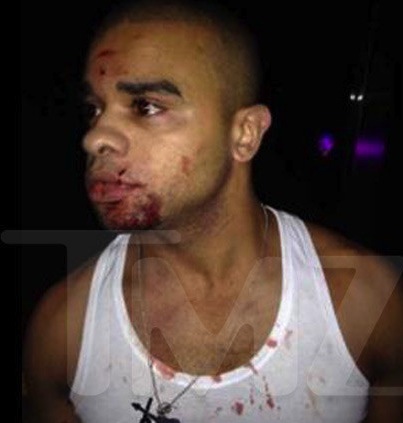 Raz-B, i.e. De’Mario Thorton – formerly of the American R&B group B2K — is currently in a coma after being smashed by a glass bottle during a show on Thursday.

TMZ reports that the 28-year-old was performing at a nightclub in Zhejiang province when he jumped off stage to break up a fight. Someone swung a bottle into his face, causing several cuts.

We’re told the Chinese police immediately stepped in … grabbing the attacker AND Raz — and dragging them both to jail.

Cops quickly released Raz after determining he did nothing wrong. Raz’s rep says cops made the bottle thrower fork over roughly $5,000 to pay for Raz’s medical expenses.

Raz initially seemed okay — he was able to check himself into a hospital, “where he underwent a 1-hour surgical procedure to repair the ‘hole’ in his lip,” TMZ reports — and even released a statement to TMZ:

Raz issued a statement to TMZ saying, “F**k this s**t hurts. I have a f**king hole in my lip. Thank god I made it to the hospital.”

Raz’s reps are now telling TMZ that the performer is “now breathing from a ventilator and is in and out of consciousness.” He apparently didn’t wake up in the morning and was taken to the hospital by his backup singers.

“He is in a coma and needs as many prayers as possible,” Raz’s rep told the site.

Stay tuned. You’ll be hearing more about this shortly.