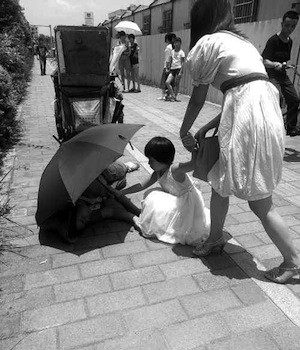 It didn’t seem too good to be true, because why wouldn’t you believe that a little girl, she alone amongst dozens of passersby, would squat with her pretty umbrella to help an unconscious street cleaner in Guangzhou? And that a reporter would happen to be there to take a picture?

Here was the original story on Guangzhou News, translated by Shanghaiist last Thursday:

A female street cleaner fainted on Huancun road on Wednesday due to the sweltering heat. Many passersby ignored the unconscious woman until a small girl, walking by with her mother, insisting on stopping and shielding the woman from the sun with their umbrella until help could arrive.

Turns out that was all fake. If you can’t trust Chinese news these days, what can you trust?

As the Nanfang points out:

“They told me it was for an umbrella commercial.  How would I know… that it was for a newspaper? If I knew, I would never do it no matter how much they pay me!” Tang said.

The street cleaner said she was paid 100 yuan to do the job. Apparently that didn’t include signing a no-interview agreement.

At least she was tipped an extra 50 yuan.

Tang said she was paid RMB150 at the end for her “hard work.” Xin Kuai Bao also reported that the young girl was also paid RMB150, and that her “mother” was one of the four people who originally approached Tang a day earlier.

A slow clap for Guangzhou News.

The Girl Who Helped Fainted Street Cleaner? Yeah, That Was All Staged (The Nanfang)

2 Responses to “Chinese Reporter Stages Feel-Good Story, Passes It Off As News”