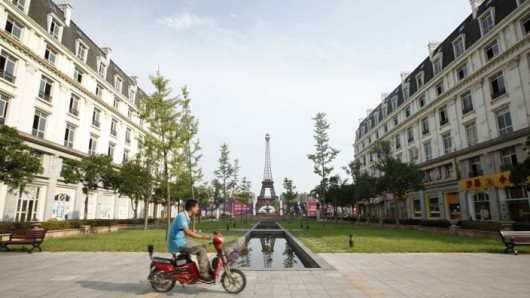 Via Quartz, Paris in China

Do you like chugging beer? If so, do keep an eye on this site this week, as there’s a relevant announcement forthcoming. For now links.

Protesting conscription in Taiwan. “Media reports estimate that over 200,000 protesters gathered in Taipei, the capital of Taiwan, to mark the funeral of a conscript soldier. Many of the crowd sung a Taiwanese version of the Les Miserables song ‘Do you hear the people sing.’” (Shanghaiist)

An interview worth reading. “In 1999, I tramped around the country for a year, made a living as a street singer and casual laborer. I met Brother Biao on a construction site, and I stayed there for three days. Every evening, after work was finished, workers carried their enamel bowls to an empty space and sat together. At that time, I sang songs for them. Brother Biao seldom spoke. For the first two days, he did not say one word to me. On the third day, he put out his hands, full of calluses, and said this to me: ‘I only have this pair of hands. But I rely on them to feed my children, my wife, and my parents. I work very hard, everyday, extremely tired. When I get tired, I drink jiu. After I drink, I feel homesick. We come from the countryside to the city. We use our hands and sweat to build high-rise buildings and bridges, but so many people look down on us. I don’t understand it. I thought that, as long as I worked hard, my destiny would change, but all year round is hard work. I don’t have anything but these hands.’” (The World of Chinese)

Whoa. “When Pakistani terrorists attacked a group of climbers in the Himalayas, ex-soldier Zhang Jingchuan escaped death by leaping off a cliff.” (Men’s Journal)

Another sinkhole in Shenzhen. “Four people fell in and three were injured when yet another massive sinkhole opened in Shenzhen on Sunday (Aug. 4), this one was over 30 sq metres in size and 1-2 metres deep, Nandu Daily reports. Although fortunately there were no fatalities, there is something extra shocking about this particular sinkhole – locals saw it coming and police ignored their warnings.” (The Nanfang)

We have a winner to the Beijing stair-climbing contest. “Nearly 600 people, including four Hongkongers, joined a race to the top of the tallest building in Beijing yesterday as part of a competition featuring some of the world’s best-known skyscrapers. // Germany’s Thomas Dold came first, sprinting up the 82 flights – and 2,041 steps – to the observation deck of the China World Summit Wing hotel in nine minutes 55 seconds.” (SCMP)

Photographer considers whether picture of Chinese migrant worker will be his big break http://t.co/XUyKnQJiV1

Went from proper handwriting in 2008 to not being able to write the simplest characters today. Me, and many Chinese. http://t.co/OGAWgyAqwR

"The US and China's relationship is SO not gay" http://t.co/fdncf4yEjv

“Is China doing irreparable harm to me and my family?” (Edward Wong, NY Times)

A goat in the CBD, via China Navis 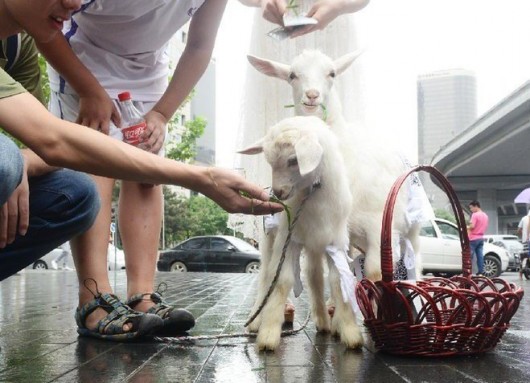 2 Responses to “Top-of-the-Week Links: World’s 2nd-tallest building almost done, Paris in China, and “To Live” is coming to a stage near you”