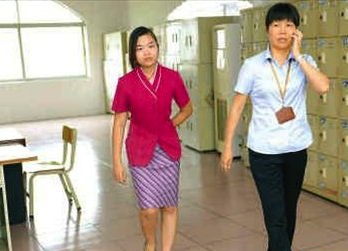 A 13-year-old girl managed to convince everyone, for at least a few days, that she was a flight attendant at Guangzhou Baiyun International Airport despite the fact that she’s 13 and definitely not a flight attendant, reports Global Times.

Why anyone would want to work in the air industry in China, where physical and verbal abuse against airport employees are common, is beyond me. But Luo Siqi (above, left) apparently loved it:

“I love the blue sky and I always dreamt of flying. I wanted to stay at the airport so I could be close to my dream,” Luo told authorities between sobs.

SCMP reports that on Taobao, a China Southern Airlines flight attendant’s uniform can be purchased for as little as 280 yuan, though they can run up to 3,000.

One last tidbit, from GT:

According to a social worker handling the case, Luo was raised in an orphanage before she was placed in the care of an elderly couple. After her foster parents were sent to a nursing home, Luo was left with a relative in eastern Guangdong Province. Unhappy with her new living arrangement, Luo traveled to Guangzhou in July on her own.

She has a dream, and now a goal. Best of luck to the kid.

One Response to “13-Year-Old Girl Runs Away From Home, Impersonates Flight Attendant [UPDATE]”