Bad calls happen in sports, we all know, but rarely does a team react like this.

In the finals of the women’s rugby sevens competition at the 12th Chinese National Games on Tuesday in Shenyang, Liaoning province, Beijing went down two early unconverted tries, 10-0, against Shandong. Early in the second half, a Beijing player was shown a yellow card and sent off. While she was on the bench, Shandong scored another try — though on a controversial play that Beijing thought warranted a yellow for its opponent.

Unhappy with the referee, Beijing’s players then huddled on the field and watched as their opponents scored 56 uncontested points to win 71-0.

Global Times reports that Beijing coach Jiang Xuming shouted from the dugout, “Change the ­referee and then we will go on ­playing.”

The decision to stage an on-field protest was apparently not unanimous:

Liu Jingchao, a sports reporter with the Shenyang-based Chinese Business Morning News newspaper, said on his Sina Weibo after the match, “Most of the Beijing players wanted to continue to play, and some of them even cried when the head coach decided to throw the match.”

15-0 doesn’t seem insurmountable, but at 22-0, another Beijing player was issued a red card, taking the team down to five players.

What happened? Perhaps the team bought into its own hype — most commentators predicted it would win gold — and when the game stopped going according to script, it simply self-combusted.

We asked Zach Fanders, who plays rugby in Beijing and referees high school games, to take a look at the controversial play, which you can watch above. Here’s his analysis:

A Beijing player was given a yellow card before the video starts, so Beijing was down to six players for two minutes. The score was 10 – 0 to Shandong. In the beginning of the video a foul is called against Shandong. It looks to me that the ref called the Shandong player for diving over the ball and sealing it at the ruck; you have to keep your feet. Beijing was awarded a penalty and took a quick tap (she did complain to the ref before she took the tap about one of the Shandong players; I think she wanted the ref to call a professional foul and reciprocate with a yellow card because she was not able to tap the ball as quickly as she wanted to, but to call that would have been a bit of a stretch). After the penalty the Shandong players needed to get back 10 meters, so they couldn’t tackle her until they were, but they got back 10 meters before they did. The Shandong player tackled the Beijing player as she was trying to kick the ball, but her foot did not make contact with the ball. Therefore, it was a knock on to Shandong, in which the ref was playing advantage to Shandong, and the Shandong girl picked up the ball and ran for a try. From the video, everything looked fine. Not sure what happened in the first half, and how the Beijing player got the yellow card.

The Chinese National Games jury said after the match that the referee, who’s from Spain, made “accurate and fair” decisions, and that Beijing played “negatively.”

After the game, Jiang insisted that the ref’s bias was “too obvious.” But a few hours later, that night, the Beijing team apologized. Global Times again:

“We totally lost our composure during the match. Our inappropriate behavior tarnished the images of rugby and the National Games. We sincerely apologize for it,” the Beijing team said in a statement.

The Beijing delegation doubled down on the apology:

“We respect and accept the decision of the jury committee. We’ve learned lessons from this incident and will not violate discipline and code of ethics in future,” the delegation said in a statement.

Rare as it is, this is not the first time we’ve encountered a coach threatening to pull his players off the field/court after a bad call. On a playground somewhere in this world, a boy threatens to take his ball and go home.

This story’s not quite over though. Afterwards, an Australian coach at the game working for Jiangsu was called a racial slur by a Beijing assistant coach. Reports SCMP:

“But the referee did nothing wrong,” said the unnamed Australian coach from team Jiangsu, who allegedly lashed out at the Beijing assistant. ”What you did was not ethical,” he said.

This infuriated the Beijing staffer, who shouted back: “It’s none of your business, N*****.”

A scuffle then ensued.

Here’s a picture of the scuffle: 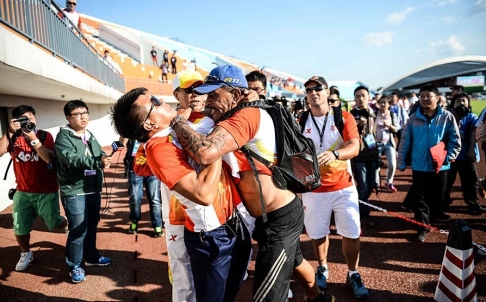