I’m not sure how, but Tracy McGrady has a way of attracting refereeing debacles. (As a Beijing fan, I’m not just talking about Wednesday night’s avian contest between the Ducks and Double Star Eagles in Qingdao, though that was massively craptacular too, with the home team benefitting from so many calls that I wondered aloud whether the CBA was publicly making amends with T-Mac for suspending him.)

The worst — absolutely no doubt worst bar none — happened yesterday.

Check out the above video if you’re curious to see how bad basketball can look when entrusted to the wrong people. Warning to true fans: you might consider avoiding this if you prefer to think of the game as being able to rise above human-inflicted desecrations. The ghost of James Naismith is miming stabbing motions at his ethereal eye as we speak.

The scenario: the game is tied at 99 with two and a half minutes to go when Qingdao brings the ball up the floor. Qingdao’s big man, Chris Daniels, gets tangled up in the post with Tianjin’s Zhang Ji, a youngster who collapses in a heap. Refs blow the whistle, one of them dashing forward waving his arms, and… there’s no call. More hand-waving from the ref as if he was engaged in semaphore. Time passes, anger flares from both benches, no one understands the situation, and then the refs seem to decide that the best solution is to just issue stern warnings to both teams.

Meanwhile, Tracy McGrady in China, everybody: 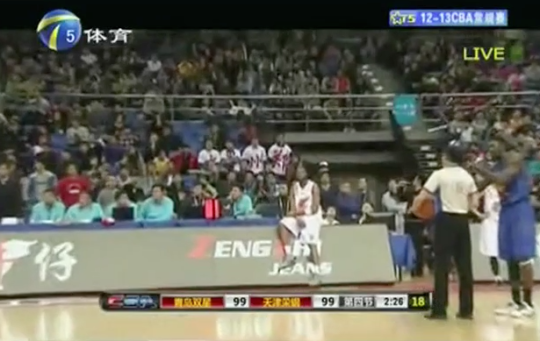 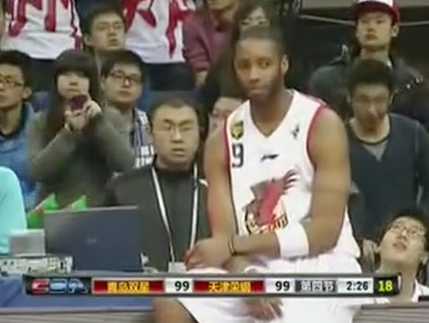 Play continues at the 1:30 mark in the video… almost. Daniels and Zhang Ji resume their places in the post, and Zhang Ji flops. Once again, the whistle blows. The refs try to talk to the two sides. One ref is literally grasping a Qingdao player’s wrist like a mother. The commentators say, “No matter whether he was flopping or not, there was contact.”

Again, however, there is no call, only absurdity followed by comedy. Watch at the 2:30 mark as a ref tries to put separation between Daniels and Zhang as if they were middle school dancers at a fall ball.

When the ball is finally inbounded 15 seconds later, Zhang Ji is whistled for touching Daniels.

At this point, Tianjin’s coach has gone beyond berserk and attempts to wave his players off the court. Everyone in the arena and watching at home knows what’s happening. It was less than two weeks ago that Qingdao’s coach pulled the same stunt on the road, at Bayi, electing not to play the final 21 seconds in a game that was already lost.

Daniels takes his first free throw with no opponent in the lane while refs continue to try to talk Tianjin’s coach out of doing something drastic. We want to point out that in these nearly five minutes, only four seconds has elapsed from the game clock.

Fast forward to the 8:08-mark now. Again, Zhang Ji appears to flop — that’s to say, he chooses to collapse when he feels Daniels touch him. To tell you the truth, I can’t even blame him, considering the circumstances. Watching at home, at this point, I was openly rooting for the game to simply end without incident, because I thought there was a fair chance that this was the day the CBA simply implodes. The refs call the foul on Qingdao this time, and the commentators say, “There’s absolutely no problem with this call.” McGrady, rightfully pissed, flings the ball away and is whistled for a technical.

Now… after all that, would you believe that the worst call of the night wouldn’t happen until later?

No? You don’t believe it? How is that possible, you ask?

Go to the 9:13 mark — we’re in double overtime now, game tied at 138, ball in Qingdao’s hands for one final possession. Just as the commentator is imploring, “Don’t foul, don’t foul,” the ref signals an off-the-ball foul on Tianjin’s Xu Lei, who was guarding Daniels in the post. There are 4.5 seconds left. Watch the replay starting at 9:30. Watch as Daniels tries to hump Xu Lei into getting a whistle blown. Watch as the ref complies. Even the announcer — and Chinese announcers will defend Chinese refs like a mother bird for their young — is incredulous: “How is this a foul?”

Two free throws later, and Qingdao has a lead it will maintain. The Double Star Eagles have now won five games in a row since losing on the road at Bayi in that infamous game in which their coach pulled them off the floor. You think more teams will try that tactic in the future? As much as we’d hate to see it, it can’t be worse than sitting through fiascos like this one.

UPDATE, 1/22, 7:16 pm: Check out the post-game reaction of Tianjin (assistant) coach Gary Gaspard, who had to be physically restrained by one of his players.

Full second half and overtime of the game here: