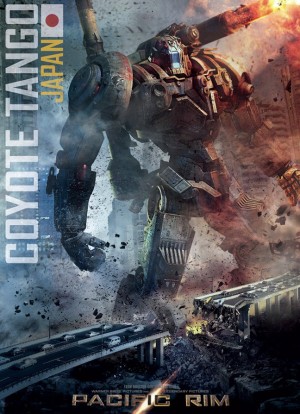 There are plenty of reasons to not like Pacific Rim, the latest summer action movie to come off Hollywood’s assembly line. That the film reflects “the United States’ Asia-Pacific strategy” should not be one of those reasons.

There aren’t many new selling points with this movie, but the United States’ Asia-Pacific strategy reflected in the movie is worth thinking about.

At a critical moment during a Kaiju attack, the American Jaeger pilot saves the Japanese girl Mako. Trained by the Americans, Mako then also becomes a Jaeger pilot. After defeating the Kaiju, she hugs her wounded American partner and emotionally says, “I don’t want to let you go”, which reminds us of the real world US-Japan alliance.

Hollywood should deeply self-reflect on its script featuring a Japanese character who isn’t a kamikaze pilot and doesn’t appear to be a lieutenant hell-bent on rape.

Hollywood spares no effort in picking materials for its blockbusters and propagating American values and global strategy. [Ed's note: Ice Age, Die Another Day, and Lord of War are the movies that are cited as examples. We're going to skip ahead.] American blockbusters not only suck away billions of yuan from China every year, what’s more terrible is that they secretly plant Western values in China’s youth, just as former United States Secretary of State Hilary Clinton said, ”What’s more important is that we have China’s youth learn how to think with American values, and to use American systems and rules to do things.” So it appears that Pacific Rim, in its subject-matter, plot, scenes, main characters, etc., continues the same old Hollywood formula, coinciding with America’s current Asia-Pacific strategy, and thus it is self-evident what the Kaiju actually are [represent].

If PLA Daily had just stopped at “continues the same old Hollywood formula,” I’d find myself nodding politely. But the problem isn’t that China’s biggest military publication, like the rest of us, thinks less of Hollywood for its mindless action-adventure comedies, but that it thinks more of them. It thinks they matter.

So our many officers and men must remove the scales from their eyes [see clearly, be vigilant], build up an ideological “firewall”, and learn how to see American blockbusters from multiple perspectives.

Multiple perspectives? Pacific Rim isn’t a David Lynch film, guys. Hollywood doesn’t treat itself half as seriously as this.

What is especially important is to plan ahead and prepare for danger, to expand and intensify military battle-readiness, raise our ability to fight wars and win wars, firmly safeguarding our nation’s interests of sovereignty, safety, and development.

This is where we slowly back out of the room.