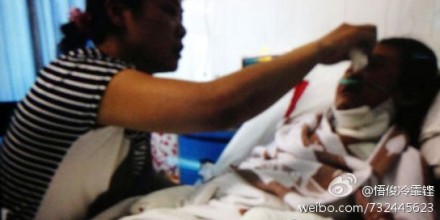 A 20-something year-old man reportedly disgruntled over the results of his “beard implant surgery” resorted to violence on Monday morning. Xinhua reports that the man armed himself with a knife and walked into the plastic surgery department of the Affiliated Hospital of Hunan Academy of Chinese Medicine and attacked three nurses, one of whom was pregnant.

None of the victims suffered life-threatening injuries, though the aftermath was very bloody, as pictures confirm (disturbing content warning). All three of them appeared to suffer face wounds.

The attacker, amazingly, got away. Police are currently trying to find him.

Xinhua explains why he was so upset:

According to the hospital, the man told the doctor on Sunday and Monday that he bore a red mark near his lips and was not satisfied with the surgery result.

Although the doctor replied that the mark was just due to follicle inflammation and that it took about six months to a year for the surgery to take effect, the man made the attack when the doctor left to check other patients, the statement said.