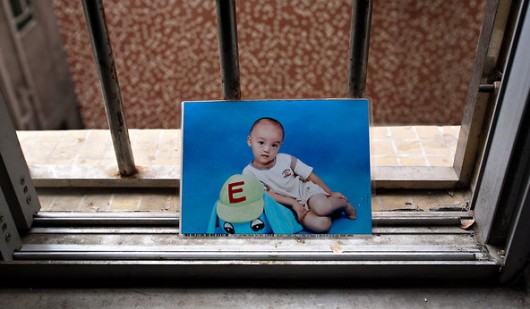 The parents of kidnapped children are often anguished, distraught, hysterical, and other things we can’t begin to imagine. That’s easy enough to understand, because we’ve all had something stolen from us, maybe even something valuable, so we can at least appreciate what it’s like to lose a child.

But this — this is slightly tougher to fathom. Via Time:

When police in China’s southeast Jiangsu province arrested seven members of a child-trafficking ring in late August, they also rescued 10 babies who had recently been trafficked by the gang. In a country where thousands of children are thought to be kidnapped each year, it seemed, for once, that there might be a happy ending for some of the affected families.

The only problem? The parents of the rescued infants didn’t want to take their offspring back.

How many of us know a form of abject poverty that would render children as commodities? The average income in Liangshan is $400 per year, i.e. 2,500 RMB. Per year. “The price traffickers will pay for a healthy child is more than 10 times that amount,” reports Time.

According to authorities, after news of the rescue reached Liangshan, not one of the parents of the 10 children contacted the police to claim their offspring. Police believe the parents feared that they would have to surrender the payments they received from the traffickers — a small fortune for these subsistence farmers — and were also concerned about having to pay the taxes and fines associated with having an extra child under the one-child policy.

The children will have to stay with their buyers for the time being. Imagine that.

For more on this subject, check out Living with Dead Hearts.

Chinese Police Rescue Babies From Traffickers, but Parents Don’t Want Them Back (Time) (Image via)