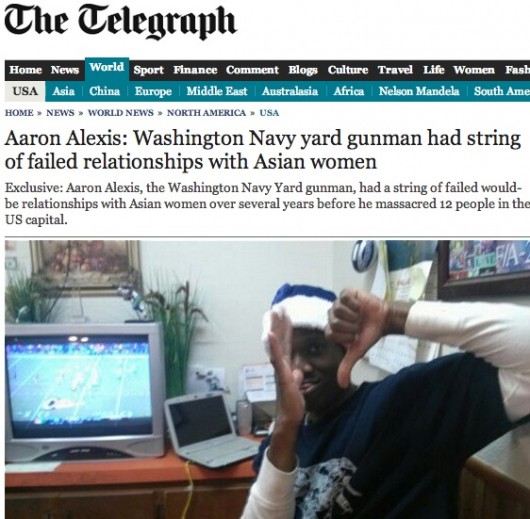 The Telegraph, reporting from across the pond* on a senseless tragedy, i.e. yet another mass shooting in the US, has apparently thought it worthwhile to use the first 12 paragraphs of an 18-paragraph story describing how Aaron Alexis — the Navy Yard gunman who killed 12 people on Monday in Washington DC — had a “string of failed relationships with Asian women.” That’s in the headline of this “exclusive,” by the way: “Aaron Alexis: Washington Navy yard gunman had string of failed relationships with Asian women.”

Alexis, 34, was said by friends to have made constant attempts to find an Asian girlfriend and his targets included a young Thai girl, a Japanese woman in Tokyo, and a Filipino nurse in America.

That’s the lead. It’s shocking, isn’t it, the depths to which a person will stoop for companionship.

During his work serving meals in a Thai restaurant in Fort Worth, Texas he would flirt with female customers, and on weekends persuade them to join him in karaoke sessions.

“Karaoke sessions.” We all know what that means.

He liked singing New York, New York in the style of Frank Sinatra, and also sang songs in Thai trying to impress women.

Okay, I can’t do this anymore. If you want to read on about how a Filipino nurse was described by an unnamed friend as “really cute” (scoop!), or Alexis’s travels to Bangkok, or whatever, go here and knock yourself out.

But in an article about Alexis’s character, it’s not until two-thirds of the way down that we get a semblance of a relevant nugget:

But Alexis complained that he had not been paid by his employer. The friend, who gave him $50 for petrol and cigarettes, said: “He said they hadn’t given him a dime and that hurt. It’s the only thing I can think of that set him off.

“It was the only time I saw him angry and cussing. He was pissed. But later he went back to work for them in America so I guess they came to an agreement.”

You mean, it wasn’t his yellow fever that drove him to the brink of madness?

Melinda Downs, who was briefly Alexis’s landlord in Fort Worth last summer, described him as a “Dr Jekyll and Mr Hyde” character with insomnia who once didn’t sleep for three days.

Because of Asian girlfriend fever, or…

A tearful Mrs Downs said: “It’s no secret that he had PTSD. He had insomnia. Sometimes he would get depressed, go into himself or be by himself, I think that was his way of dealing with PTSD. But for the most part he would crack jokes.”

You know what they say in this industry: if a story can be about a man’s proclivity for Oriental lassies, it leads.

If you want to learn about Alexis’s meditation and language proficiency, his history of untreated mental health issues, or his “pattern of misconduct” in the military, try here, here, or here.

* The article appears to have been written from the US, by one Nick Allen in Fort Worth, Texas, but we’re trying to give the Telegraph a break here; perhaps an editor in London who him/herself is fascinated by Filipino nurses, Japanese IT contractors, and Thai girls thought there was a story here.