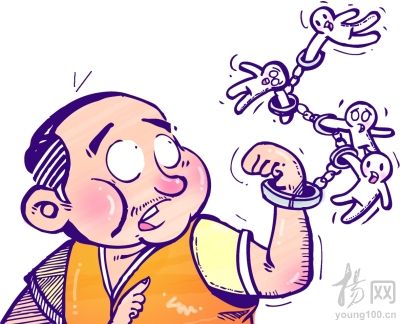 A professional thief who was fired by his gang because he had put on too much weight got revenge on his former colleagues by ratting them out to police.

In China, what do snitches get? (We don’t know.)

As reported by Nanjing’s Young100.cn, a man named Abu was once part of a gang of expert climbers who made a habit of stealing from third-story apartments.

But after arriving in Nanjing, Abu gained tremendous weight due to his habit of using his loot to indulge in food and drink. His weight soon ballooned to more than 100 kilos (220 pounds).

This, of course, was a problem for his fellow thieves, to say nothing of himself, considering the demands of his job. His partners kicked him out because he was too likely to attract attention.

Left on his own, Abu did not last. On August 22, police found him wandering late one night in a residential area. He was out of breath, and fat. (The article makes sure to mention, once again, he weighed more than 100 kilograms.) In his bag, police found a pipe, a laptop computer, and several mobile phones. He admitted to his crimes, and lamented that he shouldn’t have eaten so heartily.

A few days later, police discovered a series of third-floor apartments had been robbed. Abu realized it must have been the work of his former gang. Thanks to information that he supplied, authorities were able to capture the criminals, who were indeed Abu’s old comrades.

The gang members were all spindly, about 50 kilograms, but with sculpted arms. They were responsible for an estimated 30,000-plus yuan’s worth of stolen property.

No word on what happens now to Abu. We hope, for his sake, he’s at least kept in a different cell from his former friends.