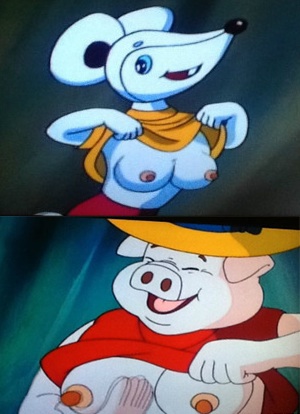 According to Xinhua, ‘Police Dog Rescue Crew’, produced by the Shanghai Animation Film Studio in 1993, was part of a public-service cartoon about post-earthquake recuse efforts. The ‘flashing’ mouse and pig were in fact volunteering to breastfeed the homeless.

Breastfeed the homeless? That’s some grade-A Grapes of Wrath shit there. Rose of Sharon would be proud.

p.s. Reminds us of this.

One Response to “Topless Vintage Cartoon Characters Are A Hoot”