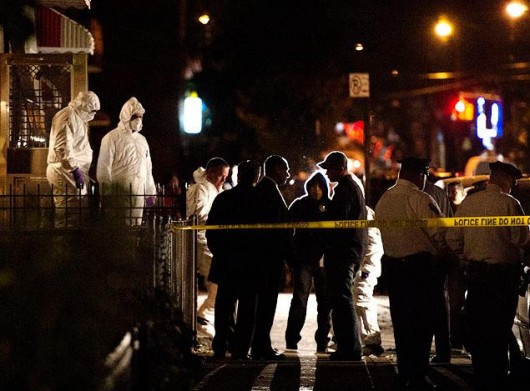 A 37-year-old mother, Li Qiaozhen, and her four children, ages 9, 7, 5, and 1, were stabbed to death inside their home on Saturday night in Brooklyn, New York. At least one of the victims may have been decapitated.

The murderer has been identified as Chen Mingdong, 25, reportedly an illegal alien from China who was staying with the family. (He is apparently Li’s husband’s cousin.) The New York Post reports that, according to a police source, Chen said he killed the family because they “had too much.”

“The family had too much. Their income (and) lifestyle was better than his,” the source said.

Inside, cops found a house of horrors in which all five victims were hacked to death and one — a 1-year-old boy — was decapitated, the source said.

Chen also assaulted an officer while in custody at the 66th Precinct.

But he became violent at one point during questioning at the 66th Precinct station house, punching a detective while cuffed to a table by one of his hands, a source said.

Earlier, he also threw a pair of eyeglasses at a sergeant who serves as a Chinese-language interpreter, then kicked the table and knocked the sergeant to the ground, the source said.

Li’s cousin said that Chen was “crazy” and that he has stayed before with the victims.

Responding officers arrived to find four young children and their mother “cut and butchered with a kitchen knife” in their Sunset Park home, Banks said.

Banks did not confirm whether Chen was staying illegally in the US, nor did he officially reveal any motive.

Officers have been assisting detectives with translation, Banks said.

Banks said the NYPD does not know if Chen had any documented history of mental illness.

“But we believe if you commit such an act like this, you cannot be too sane,” Banks said.