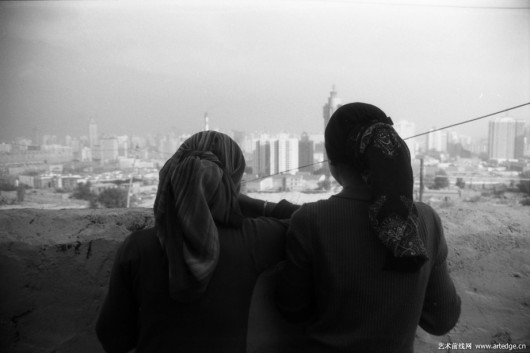 Around the 12-minute mark his partner reminds him that before he “had a big wife, a middle wife, a little wife, old wife, young wife. You had so many wives at a time, that… when you met new girls you forgot about the other ones. And you even had a role in sending them to the streets. You didn’t pay attention to the grieving of your wife and children” (12:24). He continues, “Because of people like you, now people have the perception that all jade-sellers are bad (yaman or ‘immoral behavior’). Don’t do that, brother. Let us live with our faces and chests up (with dignity and honor). We need to have face again.”

Abdukerim is drawing the attention of his audience to the combined effects of poverty and gendered violence in Uyghur society. According to a 2012 study by the prolific Hong Kong-based sociologist Zang Xiaowei, the average monthly income of Uyghur women in the city is only 527 yuan compared to the 817 yuan of their Han counterparts, or the 1,050 yuan of Uyghur men and 1,266 yuan of Han men. As other dimensions of Zang’s study show, much of this inequality is a product of a lack of opportunity. The monthly income of Uyghur women with college degrees is only slightly less than the other groups surveyed by Zang.

But the fact remains that for the vast majority of Uyghur women, heavy reliance on husbands, fathers and male suitors for financial support is the norm rather than the exception. It is due to this that Abdukerim highlights the corrupting force of new wealth not just on the stone trader who makes it big, but also on a whole retinue of women who support the trader along his trading route. Although some nouveau riche jade sellers in Hotan find amenable religious reasons for marrying a second wife, these marriages are very private with only a few witnesses and an imam. In general, second and third sexual relationships are not religiously sanctioned or formalized; they are not a result of a cultural tradition of polygyny, but rather these simultaneous monogamous relationships are a result of the fracture of local communities and economies.

Uyghur women who are dislocated from their families by the promises of boyfriends, deceptive betrothals, and the lure of the city often end up working as escorts in nightclubs or as minor operators in the gray economies of Chinese cities. Excluded from mainstream education institutions and having fallen out of line with the mechanisms of their home social networks, it is very hard for them to find either a well-paid job or a chance to return to the countryside. Instead they often fall victim of the “subordinated masculinities” of Uyghur men – the global phenomenon in which marginalized men use violence to dominate and control women within their social group. As Abdukerim’s character discusses his dealings on the East Coast he admits that, as he squandered away his wealth, he hired young women to work as pickpockets.

In the end, Abdukerim’s character is reunited with his wife. She at first refuses to speak to him, but Abdukerim’s partner tells her that, “My older brother repented for his sins; just think of your fatherless children.” He then amps up the social pressure by saying “(Separation) is not easy on kids; is even harder on grandparents. They are reaching the age where they need material comfort. At this age, if their daughter is divorced, it’s not easy for them (due to the shame this would bring them). If we only think of ourselves, how are we any different than animals?” (20:30)

In a testament to her disempowered position, after only the briefest of protestations the wife agrees by saying, “If he really repented, in order for my kids not to become living orphans, my door is open.” Harmony is thus seemingly restored. Then, true to the universal formula of the melodrama, Abdukerim discovers that his 15 year-old daughter has already left for the cities of the East to work in the streets. His attempt at a return to Uyghur dignity is too little, too late.

3. “The average hen that lays an egg every day is better than a golden rooster that doesn’t crow all year round”

Structural violence refers to the violence experienced by those on the margins of mainstream political economies. Rather than pointing clearly to one particular source, this sort of violence is the result of institutional and cultural structures. As I mentioned last week the overall theme of this itot is one which addresses the moral economy which accompanies rapid social change and the dislocation of a culture in crisis. Abdukerim is pointing out that the discrimination Uyghurs face in Chinese cities is not wholly without cause. As he is says in the itot, “Now when we go ‘inside’ (China) the taxi drivers won’t pick us, we can’t stay in hotels, they all run away as if from plague” (17:31) — a line which draws a huge laugh from the audience. But he also goes on to say that, “Not every (Uyghur) ‘inside the mouth’ (of China) is bad, some are good businessmen, they open restaurants; they do good charity work.” Yet, despite this diversity of actors, Uyghur women often face the brunt of poverty and powerlessness.

I have tried to point out in this essay that dependable gender relations are important for the maintenance of Uyghur social life. If social stability is to be maintained as local economic systems are joined to larger urban networks, it is increasingly important that structural violence experienced by Uyghur women be reduced as well. Uyghur women themselves will have to fight for equality. Abdukerim shows us that as long as they continue to practice a heavy reliance on increasingly unreliable sources of security, they will continue to find themselves in precarious positions in Chinese society.

Yet Abdukerim also points out that Uyghur women are tremendously proud of Uyghur men. Nowhere have I seen this better illustrated than in Abdukerim’s 2008 comedy (below) called “Pour Water Where It Can Be Received,” after a wife’s suspicions of her husband cheating on her are temporarily relieved. Playing with the Uyghur rhyme bir meng (1,000) and birneng (one’s), she says “Ve-ay, let him play – I want him to walk with girls. He is good enough to walk with any girl. Look at him. My husband is a real man. A man when he goes out belongs to 1,000 women, but when he comes home he belongs to one. OK, he can walk” (3:09).

According to one female Uyghur viewer, this is how smart Uyghur women deal with infidelity. If she fights in public and takes it “too seriously,” it will be the woman who loses the fight no matter how wrong the husband’s actions might be. Although Abdukerim’s wife might be performing this pride in order to protect her husband’s public image, the fact that this image of a Uyghur man resonates across Uyghur society is evidence of its trueness to experience. Both Uyghur men and their wives believe that they have the real potential to live with dignity and honor.

2 Responses to “Dispatches From Xinjiang: Comic Tragedy And Uyghur Women”