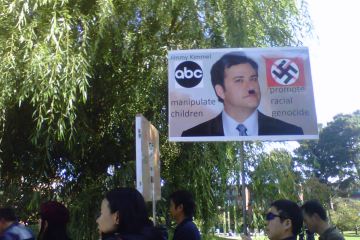 Photo via Time from San Francisco protest on October 28 against ABC and Jimmy Kimmel, because of the “kill everyone in China” joke.

Although the comment was made by a child, the episode has in some ways, offered a reflection of mainstream public opinion in the US on China.

It is difficult to read what the US is really thinking when it looks at China especially with China expected to play a bigger role in geopolitics alongside the US in future.

Sino-US relations cannot be viewed in the same light as those of the former Soviet Union and the US during the Cold War. China and the US have a more complicated relationship…

Horse on cow dung clopping on your living room carpet. You see the people you’ve sided with, Asian American protesters? Does this convince you to stop?

Friends: if we can’t take an off-the-cuff remark from a 6-year-old child without referencing Nazis or building straw men with ridiculous hypotheticals (“what if he said that about Jews?”), we’re done. Finished. We’re hopeless, and we will never be liberal participants in an open society. We might as well shack up in the Singaporean subway system and count down the hours toward a copacetic death. If you want to begin a conversation with a friend about ethnocentricism and casual racism, try using YouTube videos as a springboard. But have a little bit of self-respect and realize, please, that we’re talking about Jimmy Kimmel and his brand of niche comedy, and a 6-year-old who really probably does not think we should kill all Chinese people. It is not a reflection of mainstream public opinion on anything, in the same way — looking at you, American media — that those San Francisco protesters are not a reflection of Asian American opinion on this issue.

My fellow Asian-Americans, portraying Jimmy Kimmel as Hitler does none of us any good: http://t.co/ftyz28tLMI h/t @samuel_wade