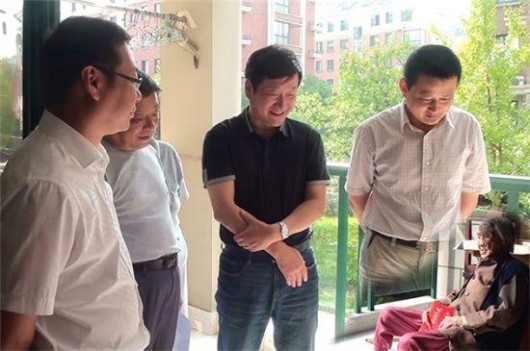 In the sizable annals of bad photoshop jobs, this one belongs in the first chapter. The picture you see above was taken in Ningguo, Anhui province, with reports saying that these four — which include the city’s vice mayor — were visiting a 100-year-old woman.

Except… obviously not. (They’re frickin’ giants!) The pic ran on the website for Ningguo’s Civil Affairs department, a website that was apparently taken offline after the image drew nationwide attention. Hug China has more info:

The picture was dug out only accidentally by some netizens who have been unhappy to know that officials in the civil affairs department of Ningguo ordered a netizen-sponsored donation campaign for three poor local residents be cancelled because the officials thought the donation campaign was unfair for other residents in difficulty.

Do better, Ningguo Civil Affairs office. Next time, AT LEAST PHOTOSHOP IN THE LEGS:

UPDATE, 10/30, 6:39 pm: As Alia of Offbeat China points out, the vice mayor did actually visit elderly women, so we can chalk up the photoshopping to studipity rather than dishonesty.

The image has since been used as a telling example of blatant government dishonesty in China. But to be fair, as shown in images below, these officials in the picture, including a vice mayor, did pay visits to several 100-year-olds, as part of the celebration of China’s Elderly’s Day. It’s more of matter of stupidity than dishonesty.

“After this incident occurred, the picture was reproduced on all the major web portals and this had a negative impact on our city,” said Ningguo’s government in one of several statements posted on its website Wednesday (in Chinese).

“For this reason, we have decided to publicly admonish the Civil Affairs Bureau and the person responsible, Xu Feiyu. We hope all departments will learn a lesson from this incident and be even more rigorous in checking the information they publish.”

Officials said they really did visit Ms. Cheng, but acknowledged that the picture was altered using Photoshop, a program that is used to manipulate images.