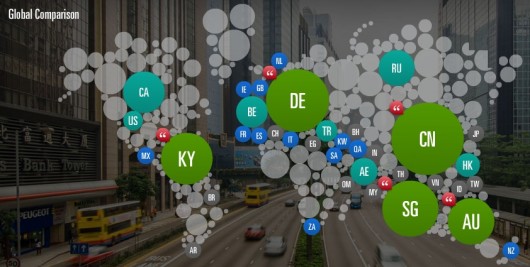 A recent report by HSBC has confirmed what we all know: China’s a pretty nice place to live as an expat. The best place, empirically speaking.

Previously recognised as a key destination for career-minded expats, this year’s survey shows that China’s workforce is becoming ever-more global, with more and more expats arriving in the country to advance their careers.

The report acknowledges that living here offers a great “work-life balance,” which we imagine is the boring way to say it’s easy for foreigners to make enough money to get shit-faced on scotch.

Of course, it’s not all about the exuberant unwindings and louche lifestyle. China’s apparently a fine destination for families, according to HSBC:

China is also valued by expat parents as a destination to bring up their families. Many expats in China believe that the quality of education available to their children is better than that at home (56% compared to a global average of 49%) and three quarters (74%) say that their children are safer in China than they were at home. Childcare is another area in which China triumphs as the country occupies 16th place in the league table.

Dan Harris of the China Law Blog points out that “if you take out the raising children portion, however, China comes in at number 2, behind Thailand.” Still, it’s nice to see a formal acknowledgement, now and then, that for all the problems we encounter here, there are more reasons to stay than leave. The mainland is relatively inexpensive, filled with opportunities, and stocked with history and culture. Importantly, it’s never boring.

We say this knowing full well that there is a vocal subset that will choose to focus on the pollution, the traffic, the corruption, the censorship, the failings of government, the abuses that occur throughout the various strata of society, and any number of problems that afflict developing countries. If you take out the actual living, the minutes we might spend walking from our apartment door to the local supermarket, with greetings exchanged with the courtyard’s maintenance man and the fruit vendor, and the hours we pass birdwatching or cycling or engaged in another hobby of choice, and the long evenings when terraced rooftops are colored with the plush sunsplash of a changing season — yeah, China kinda sucks. Now show me a place that doesn’t.

11 Responses to “Report: China Is The Best Place To Be An Expat”