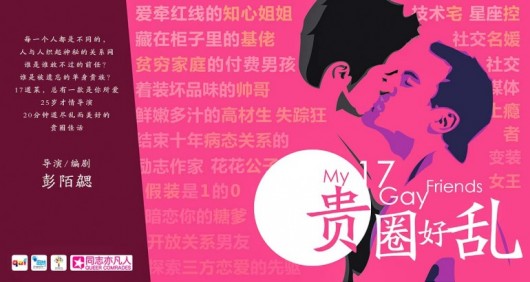 Via Beijing Today, which swings by now and then to introduce art and culture around the city.

Eighty percent of the night’s collected cover went to support the production.

Attendees had the choice of being a judge or trying out for a role in the film. Judges were given masks to protect their identities and limited to choosing only two candidates.

My 17 Gay Friends will be Peng’s sixth film, but his first to use Dreamore, a Chinese crowdfunding site that allows anyone to back a project in exchange for rewards set by the creator.

“Every backer’s name will be shown at the end of the film,” said Peng, whose 2012 documentary Micro Search was featured on iQiyi.com and viewed a million times. “We also opened our casting to the crowd. Keeping our backers involved in this project is an important part of making this film.”

As on Kickstarter, the most popular crowdfunding platform in the US, projects that fail to reach their goal within the allocated time will not receive any money.

“The platform can help you get started, but you still have to work hard to achieve your funding goal,” Peng said.

Peng grew up in rural Hunan province and loved telling stories as a child. He spun yarns to entertain his neighbors while they played mahjong.

His latest story is an avant-garde short that digs into Beijing’s gay scene.

“Most gay films are gloomy, dark and depressed,” Peng said. “I want to show the optimistic, light-hearted side of gay life.” 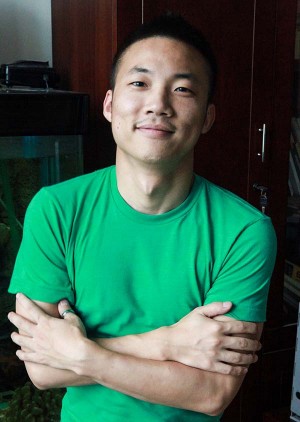 The planned 20-minute film will offer glimpses into the lives of 17 of Peng’s friends, showing their personalities, living situations, and love lives.

The film takes lighthearted jabs at many of the stereotypes and labels that cut across gay society, such as concepts of femininity and masculinity.

It opens with one gay relationship that is breaking down in its fourth year. After years of compromising, the couple has to come to terms with the fact neither wants to be the “man” in the relationship.

With their relationship in shambles, the two talk to sister Zhixin, who knows everyone in the gay community and offers comfort and advice.

The film’s Dreamore campaign began in October and closes later this month. Shooting is scheduled to begin in January at 10 locations across the city.

“It’s hard [for indie films] to play at the cinemas, but I guess more people will get to see it when we put it online,” Peng said.

Those interested in supporting the project have until December 31 to donate on Dreamore.