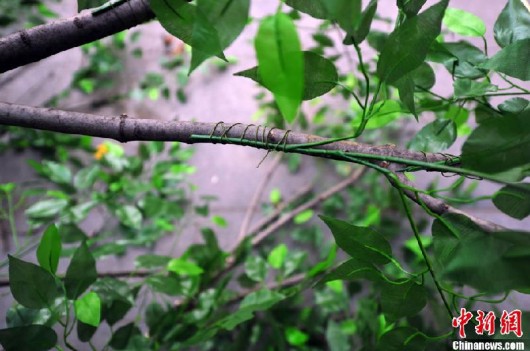 One of O. Henry’s most famous stories is “The Last Leaf,” a tale of hope, perseverance, and sacrifice. In it, a young girl dying in a New York hospital believes that once the last leaf falls from a vine outside her window, it’ll be time for her to go. “Oh, I never heard of such nonsense,” her friend, Sue, tells her, but she believes it, and so, lying in bed, she counts down the leaves. Five. Four. Three. Two…

But impossibly, miraculously, one final leaf lingers, through rain and ice, against all reason — and the woman recovers. She doesn’t know how.

“Didn’t you wonder why it never fluttered or moved when the wind blew?” Sue asks. “Ah, darling, it’s Behrman’s masterpiece – he painted it there the night that the last leaf fell.”

In Shenyang, Liaoning province, someone apparently decided to pay homage to Old Behrman’s “masterpiece.” (Note: this is not at all true. O. Henry has been translated into Chinese, but he is not the reason for this next part.) Here’s Hug China with an explanation:

A reporter of Chinanews.com has done some investigation and was told that the ‘green’ trees were actually dead for some time and were brought by city management officers to the bustling street after decorated with artificial branches and leaves.

Some local residents have expressed their discontent at the practice of the Shenyang authority, saying installing artificial leaves on real trees does not comply with law of nature and is prone to mislead children.

They’ve been placing fake green leaves on Shenyang’s trees because they believe green looks better. Meanwhile, tourists to Beijing’s Fragrant Hills are killing one another to get a look at the leaves changing color, from green to red and orange. China, right? Contradictions galore.

One Response to “Fake Leaves Tied To Shenyang’s Real Trees”