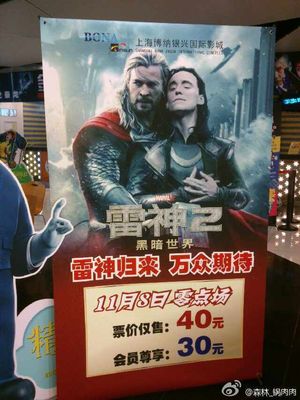 We’re going to assume this was an accident, because in which universe would a fan-made poster depicting hunky Thor with his arms wrapped around an aroused Loki find itself front and center at a mainstream theater? (If you answered “Asgard” in your head… congratulations!) Atlantic Wire has this wonderful tale:

The poster reportedly appears outside a Shanghai cinema, and was spotted by this Korean site (the translation reads: Thor in a Shanghai theater (hahahaha) How are you going to solve it?) and on China’s social media platform Weibo.

…The poster is actually a fan-made, photo-shopped image — a practice that some culture lovers, both straight and gay, do for their favorite fandoms (movies, comics, books, tv shows, boy bands etc.). It’s kind of the next eventual step for fan-fic or slash fiction.