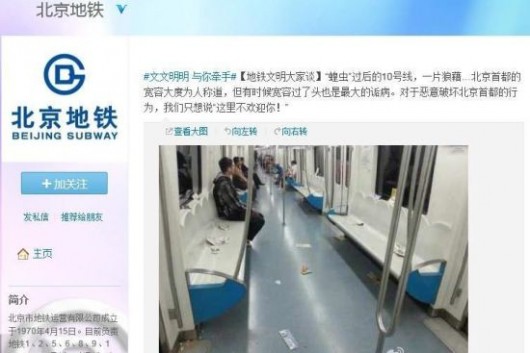 The Beijing Subway’s official microblog posted a message on Sunday (since removed) that it was upset about uncivilized passengers — specifically, “locusts,” a word that Hong Kongers use to refer to mainland Chinese tourists — leaving their trash on Line 10.

Hug China with the translation:

Beijing Subway V: #Civilization hand in hand with you# [Subway civilization discussion]  The Line 10 is scattered about in mess after “locusts” have left. The capital city of Beijing is well praised for its tolerance, but sometimes is also criticized for its over-tolerance. For those that intentionally destroy Capital Beijing with bad behaviors, what we can say is only that You are not welcome!

Unsurprisingly, netizens caught a whiff of discrimination in that post. Did Beijing Subway mean to imply that certain groups of people — locusts refers to out-of-towners, so… migrant workers? — aren’t welcome?

“When they say that Beijing does not welcome you, it sounds like they mean anyone who is a non-local, when in fact they only mean people who throw their garbage everywhere,” the Net user said.

Net user Lanseyaojidingxixi said that it is a shame that Beijing is calling non-locals “locusts” when mainlanders have been called “locusts” by people in Hong Kong and should therefore know better.

“Who are the ‘locusts’ anyway?” the Net user asked.

It is a shame that Beijing is calling non-locals “locusts” when mainlanders have been called “locusts” by people in Hong Kong. Beijing Subway has given up its high ground — higher than even Hong Kong — just to reinforce some crappy stereotype about the boorish migrant worker. Gone are they days when we can shake our heads and tsk-tsk at those discriminatory Hong Kongers. For shame.