If you haven’t been following the story of Bloomberg vs. the New York Times, start here. That’s NYT’s article, built around an anonymous source within Bloomberg, claiming that Bloomberg editor-in-chief Matthew Winkler spiked a sensitive China story due to pressure.

“He said, ‘If we run the story, we’ll be kicked out of China,’ ” one of the employees said. Less than a week later, a second article, about the children of senior Chinese officials employed by foreign banks, was also declared dead, employees said.

One of the Times’s sources was recently identified as prize-winning journalist Mike Forsythe, who apparently has been suspended.

Thanks everyone for the incredible outpouring of sympathy and support. It has really helped me and my family get through this.

For those outside China: @pekingmike, suspended by Bloomberg, is outstanding reporter of great integrity http://t.co/kA7IOQb3Vo

@PekingMike Mike Forsythe is a reporter of exemplary probity and professionalism. Having worked the same beat for years, I know none better.

When Bloomberg tried to do hard journalism here before, it got itself blocked — with no Pulitzer Prize to show for it. (The New York Times also got itself blocked, but Columbia at least smiled down upon them.) Maybe Bloomberg just felt it wasn’t worth it this time. After all, it’s a financial company too, so if the Times’s story is true — which Winkler and another editor have denied — the brass should just fess up to it. It always has the luxury of slapping a Benjamin Franklin upon the outside of a newspaper office’s window and shouting, How bout dem apples?

All this is background for the above video from Next Media Animation. Here’s a screengrab: 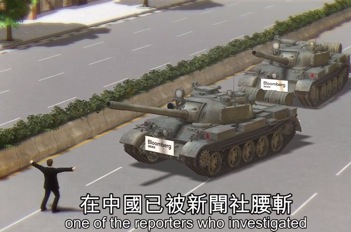 The Tank Man comparison is a stretch, but media could use more grudge matches. We thank NMA for doing its part. Winkler hopefully embraces his inner heel and begins an investigative report on Chris Buckley’s drinking habits.