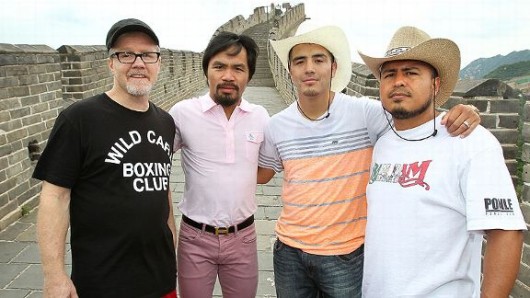 Manny Pacquiao is in China, of course, to fight Brandon Rios on Saturday, in Macau. Despite losing his previous two bouts, Pacquiao’s camp seems… confident:

“I know I predicted Manny would knock Rios out inside six rounds, but based on our last workout, I don’t see how Rios makes it past the fourth round,” said trainer Freddie Roach.

The Pacman’s a heavy favorite, but you never know with old boxers. One of these days, they’ll take a stunning blow to the chin, go down, and retirement’s upon them before fans have paid their proper respects.

I’m not telling you to watch Saturday’s fight. But if it’s on CCTV (the listing says there’s boxing on Sunday at 11 am, though it doesn’t specify who’s fighting), you might as well.

One Response to “Picture Of The Day: Pacman Sighting At The Great Wall”