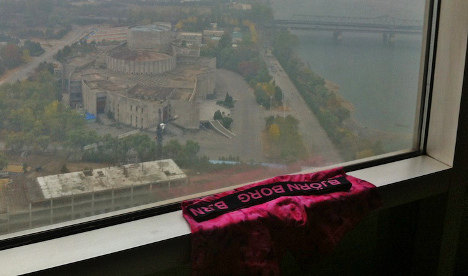 Swedish underwear brand Björn Borg have made good on a pledge to “love bomb” 450 pairs of underwear in Pyongyang. The company hired a “journalist” who went “undercover” and threw the garments from the 41st story of a hotel window.

You can read all about it on this anonymous blog. If you were wondering what the underments looked like close-up, wonder no more: 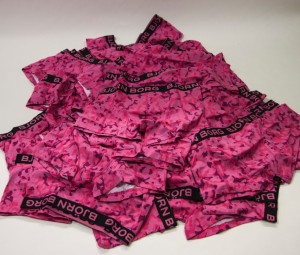 So — underwear, hot pink; Pyongyang; what’s the story here? The Local has you covered:

The focal point of Björn Borg’s autumn campaign ‘Björn Borg says JA! to Weapons of Mass Seducton’ was The Drop, a scheme to “love bomb” underwear onto the city voted most in need of some love and seduction.

“We couldn’t even imagine a place like North Korea would win,” Lina Söderqvist, marketing director at Björn Borg, told The Local. “We had planned how we would pursue an airdrop, and we could have done it almost anywhere in the world – except North Korea.”

Just over a week into the campaign, The Drop’s website experienced a traffic surge from South Korea. The North Korean capital sky-rocketed in the poll, gaining more than 25,000 votes overnight. By the poll’s end on October 31st, more than 53,000 people around the world had taken part in the vote, and 60 percent went to Pyongyang.

Here’s a picture of an underwear in flight: 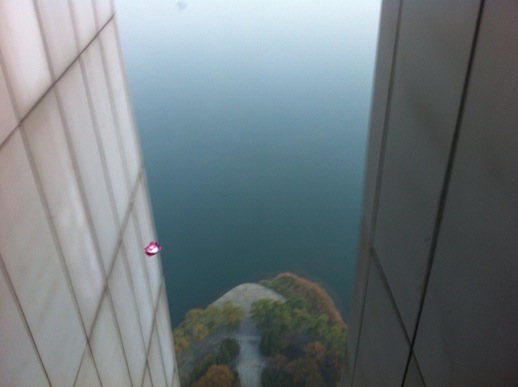 Björn Borg’s stunt comes on the heels of Elle Magazine’s “North Korea Chic” faux pas, and just before this latest advisory from the US Department of State against visiting North Korea. “Travel by U.S. citizens to North Korea is not routine,” it reads. (It left out the part where it’s totally routine if you go with a travel agency such as Koryo Tours.)

When you’re a “hermit kingdom,” these are the sort of things that will happen to you, I guess. Kitsch feeds on mystery. Your lawn will get littered with pink boxer briefs. Many people will become infinitely confused.

(H/T Alicia via The Atlantic)