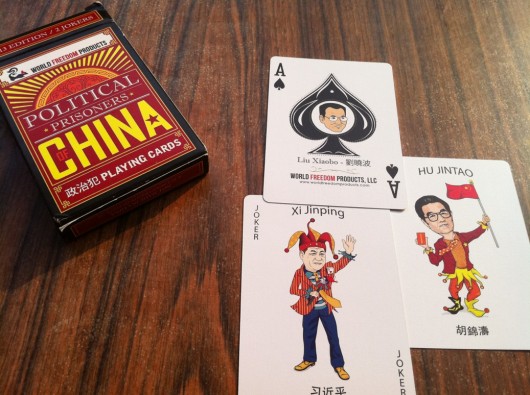 An entrepreneur in Dallas got in touch with me last month saying he had a product called Political Prisoners of China Playing Cards, asking if I’d like to review them. Chinese political prisoners. Playing cards. Dallas. I live in Beijing. It made no sense. How could I say no?

To field test, I got in touch with a dissident. We met for lunch with a pair of mutual friends at the popular hang-out Fodder Factory in Caochangdi art district.

You might not recognize the name Wang Zhongxia, but authorities do. As Wang tells it, he was first made aware of China’s internal security apparatus when agents interrogated him in 2007 for participating in Chinese democracy online forums while he was a student at People’s University of China. He signed Liu Xiaobo’s Charter 08 in December 2008, again attracting unwelcome attention, and three months later police issued a warrant to search his house. They seized his laptop, a flash drive, a book by Hu Ping, and T-shirts featuring images of Liu Xiaobo, Chen Guangcheng and Hu Jia (Wang made them; here he is modeling one).

That year, the 20th anniversary of the June Fourth Incident, Wang was placed under house arrest from May 27 to June 8. He was detained for 23 days in 2010 after Liu won the Nobel Peace Prize, and again in 2011, possibly to keep him from commemorating Liu’s birthday (Wang said authorities never told him). “Being a political prisoner is something that stays with you for whole life,” he said. He admitted that he was scared after his initial encounter with the Public Security Bureau, but his desire to speak out simply overpowered his fears. 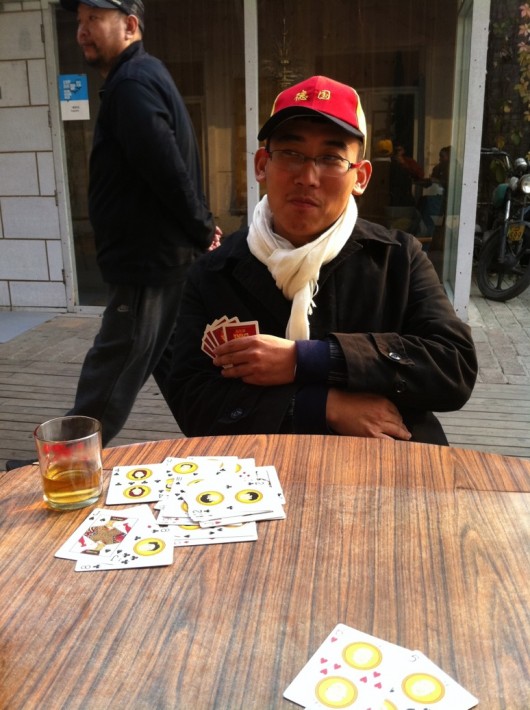 The cards themselves arrived in a standard card-sized box in plastic shrink wrap, obviously professionally made and — it became clear after a conversation with creator Grant Shepard — carefully conceived.

“This was really a labor of love,” Shepard said, describing how he’d return from work at 5ish, put the kids to bed, then coordinate with two designers in Indonesia from 9 pm to 2 am. There was lots of trial and error. There were interviews with human rights experts, facilitated by Rick Halperin of Southern Methodist University and Jennifer Holmes of University of Texas at Dallas (who’s a board member on the Bill of Rights Defense Committee). A pool of 100 Chinese dissidents was whittled to 40, and finally to 13, one for each card value from 2 to King, with a special image for the Ace of Spades.

“I feel like if any region needs to allow its citizens to freely collaborate and communicate, it’s China. If it does, they’re going to take advantage of the biggest goldmine of talent that the world has ever seen,” said Shepard, who’s always been fascinated by China. He has yet to visit but would like to soon. “I’d like to get these [cards] to China someday, but that is probably not a realistic short-term goal. The goal is to make one ponder, inspect, and want to learn more.”

Possessing one of these decks here, of course, will not get you detained. Believe it or not, police have better things to do. But it’s equally clear that you’d be foolish to try selling them alongside cigarettes on, say, the streets. Peering off the laminated cards are the likes of Tan Zuoren, who petitioned the government following the 2008 Wenchuan Earthquake; Shi Tao, who disclosed state secrets and was ratted out by Yahoo; and lesser-known individuals including 1989 Tiananmen demonstrators, minority leaders, religious dissidents, writers and bloggers. All the dissidents are peaceful, Shepard noted. The Ace of Spades is Liu Xiaobo, the 2010 Nobel laureate who is five years into an 11-year sentence for subversion.

Now the real question for the potential customer: how do the cards play?

Our game of choice was the Chinese classic Zhengshangyou (争上游), or Big Two. I shuffled and we did the Chinese thing of taking turns grabbing cards off the top. Almost immediately, Wang noticed that the Queen — land rights activist Ni Yulan — had actually been released from prison in early October. Whistleblower Shi Tao — the 10 — is also out, released in August.

Wang puzzled over the 2-card, Zhiwen Wang — “This guy seems important but I don’t know him,” he said. (He later googled; Zhiwen Wang is a Falun Gong practitioner.) The 2 happens to be the highest value in Big Two; knowing my opponent had one certainly helped my position. So did card-playing savvy: despite a weak hand, I finished second, just ahead of Wang.

The cards were… good. They played like any normal deck. I dealt the second game –snatching is slow — and the cards slid just the right distance (whatever that distance might be). To nitpick a little, in several versions of Big Two, the relative size of the jokers matter, i.e. red or black, and in the political prisoners deck, both jokers are red. A shrewd player should recognize Xi Jinping as “bigger” than Hu Jintao — current vs. former president, for those not caught up on Chinese politics — but outfitting Hu with a black vest would’ve cleared up any confusion.

“I think it’s a good way for people to know prisoners in China,” Wang said. “But actually, this set only includes 13 people — that’s too few. Fifty or 40 would be okay. With only 13, the choices can be questioned.”

And indeed, he began questioning. “Recently the leadership has arrested too many people,” he said, naming Xu Zhiyong, detained in July for gathering “crowds to disrupt public order,” andWang Gongquan, a member of the New Citizens Movement. Increased censorship over the past three months, especially in social media, has magnified the chilling effect on exchange, too. Of course, if Wang is any indication, there’ll be no shortage of expression. In other words, Shepard might not lack candidates to fill out an entire deck in the future.

Wang did slightly better in our second game. He beat me, sliding Zhiwen Wang across the table with his final play.

What: Playing cards, laminated, professsional and complete (reciprocal images so you never have to turn the cards in your hands, one-eyed jacks, suicide kings, etc.). Original artwork from three designers.

You’ll want to buy if… You want to impress friends or a particular someone with some “real talk” about China over beer, tequila shots, and vodka cocktails while playing Kings Cup.

You’ll not want to buy if… You’ve ever gotten on the wrong side of the China’s Public Security Bureau, are paranoid about real or perceived contraband, or work in a Chinese diplomatic setting. Also, if you hold any particular grudge against these people…

…you may not be completely happy with this product.

One Response to “Political Prisoners of China Playing Cards, Reviewed”