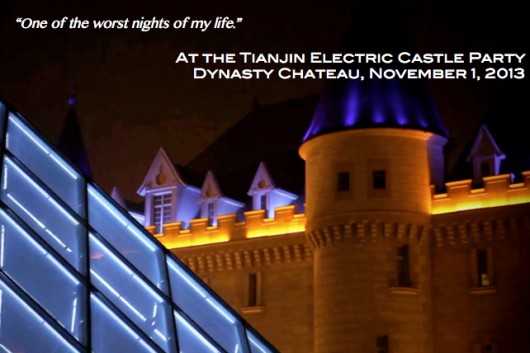 Did hundreds, possibly thousands of expats — including promoters Street Hustle, ticketing agency Send Me Tickets, and local magazines — get swindled by organizers of the worst China party of the year? UPDATE, 11:08 am: the organizers have issued a statement.

It was a downright debacle.

Here’s TimeOut Beijing with this report from the streets of Gongti — because the problems began from the outset, before the party could even get underway:

We were among the hundreds stranded at Gongti east gate after the last round of buses – maybe four or five in all – had departed at 9pm. Being that the first one back from Tianjin wasn’t set to leave until 5am the next morning, it should have been no surprise to Night Owl Entertainment that such a large group showed up then. Oh, that and the fact that they were claiming that attendance to the party would break the previous world record.

We contacted Street Hustle about the bus shortage. We were told that Street Hustle, who were themselves still on their way to the party, was in communication with the organisers and that more were on the way.
The reinforcements were laughable. Vans half the size of the now long since departed buses showed up one by one, no more than five in all, and the mad rush to get on them probably saw countless injuries. We witnessed folks climbing in through back windows, refusing to let go of doors even as they were driving away, running across something like 6 lines of traffic to get to a van parked on the other side of the street. It was sheer madness that we watched from the sidelines, hoping that this couldn’t possibly be the last of the available transportation.

Will Philipps, writing for That’s Beijing, actually made it to the chateau, but apparently it was hardly better there:

But at the party itself, thousands were marooned outside the castle gates in five-degree temperatures for the duration of the night, after a veritable company of uniformed police showed up forcibly prevented people from entering the castle (we’re still trying to figure out who called them and why, but essentially the police presence, akin to that of a military occupation, did little to help get the party started).

Guests were unable to get any of the complimentary drinks on offer – five cocktails and two beers, according to the tickets – leading to numerous scuffles and arguments breaking out between angry revelers and the clueless “volunteers” left working behind the bars. Most astonishingly, there were no security checks going in, and many reported that their tickets were not checked upon entry. One witness described to us guests making it up onto the actual roof of the castle, with many forcing their way in from the freeze through open windows and side doors.

Additional downside: those who made it to Tianjin were, well, in Tianjin. Stuck there, in fact, since the buses refused to leave until 5 am. There was reportedly one bar and one food stall, which sold hot dogs.

“I would describe it as a clusterfuck,” one party-goer told us. “It was impressive how disorganized they were…. Nobody knew what the hell was going on. I didn’t have high expectations and prepared accordingly, many others didn’t.”

One of those “others” who wasn’t prepared for such a shitshow — because when you pay 350 RMB, you at least expect organizational competence — told us, “I can say that it was probably one of the worst nights of my life. I don’t even know where to begin with how many disappointments my friends and I faced due to the extreme lack of organization as well as the people that were amongst us.”

There was no one that checked our tickets when we got on the bus to Tianjin and when we arrived, after three unnecessarily long hours due to complications and too many people being on the bus (seats were shared amongst three people while some people sat on the floor), we were told immediately upon arrival that the “Castle” was at full capacity and we would not be allowed in.

After getting off the bus and entering the “venue,” which was just a few tents and a DJ stage outside, not including the castle that we could not enter, my friends and I were lost and cold. We wandered throughout the field and because there was a ridiculous amount of crazy, drunk, and rude foreigners we felt it was almost impossible to do anything. Something as simple as wanting to buy a soda required you to get a token from a small booth, which people were crowding over for almost the entire night.

We were left outside the castle, freezing, starving, and bored until 4 am, when we were finally able to make our way inside the place. Even when we wanted to leave we were told by the “security guards” that none of the buses were permitted to leave until 5 am. My friends and I actually couldn’t get on a bus until almost 6:30 in the morning and did not arrive back in Beijing until 9:30 am.

The security guards I found to be extremely frustrating because there were so many of them just standing around together in every corner of the venue doing absolutely nothing except yelling at people to make sure they didn’t attempt to enter the castle.

Another thing that really struck me was how the environment seemed to make everyone adopt this crazed animalistic nature. I really felt like it was a survival of the fittest competition, especially when trying to get back home on a bus. People were shoving and fighting and only looking out for their own. Some of the people there even made two of my friends cry because they were intentionally shoving and trying to scare and hurt them to ensure their own spots on a bus ride home. All in all I can say that it was a complete disaster and the perfect Halloween nightmare.

Read that last paragraph again. People were fighting because of all the HATE that party organizers had inspired. It was SURVIVAL OF THE FITTEST, because expats in face paint and costume simply can’t be expected to not lust for BLOOD. In the jungle of Tianjin, one kills or is killed. It’s the goddamn Hunger Games. Those left on the curb in Gongti were lucky.

Street Hustle Promotions sent a press release on Sunday for immediate distribution, offering an apology but mostly shoving the dead / decaying body of Night Owl Entertainment under a road roller. The release — posted in full on the Beijinger’s website — begins, “We stand with you cold, thirsty, hungry and disappointed.” Street Hustle wants no part of distributing refunds, however, so it’s not like they literally stand with you, cold, thirsty, or hungry. In bold text, you’re directed to contact Night Owl Entertainment at 186-3099-4341 or info@nowentertainmenthq.com for refund requests. (Ha!) 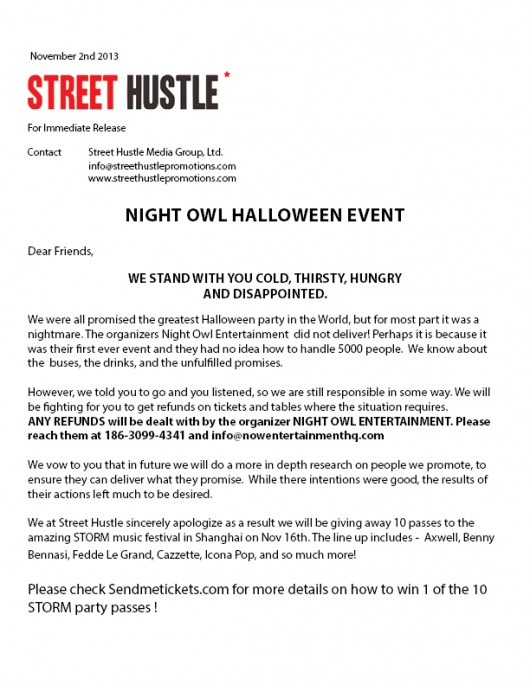 The Night Owl Entertainment website has gone black. The people behind it have apparently cut and run.

By the way, here’s Send Me Tickets’s response to this fiasco, which it posted to its WeChat. As far as attempts to placate customers — angry, confused, frustrated, sad people who gave Send Me Tickets 350 RMB for admission to a cold, soulless, and booze-deprived torture chamber — we can only say that “snarky memes” isn’t exactly going by the book. 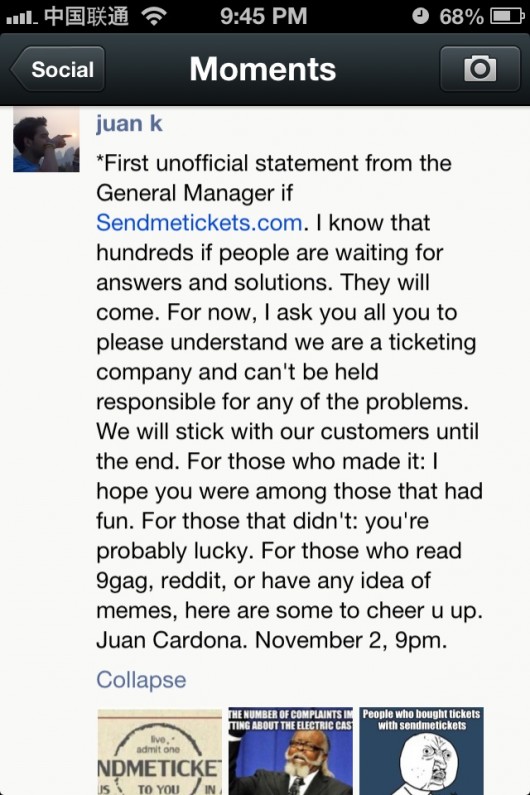 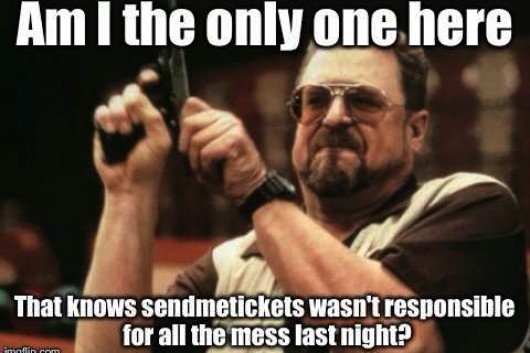 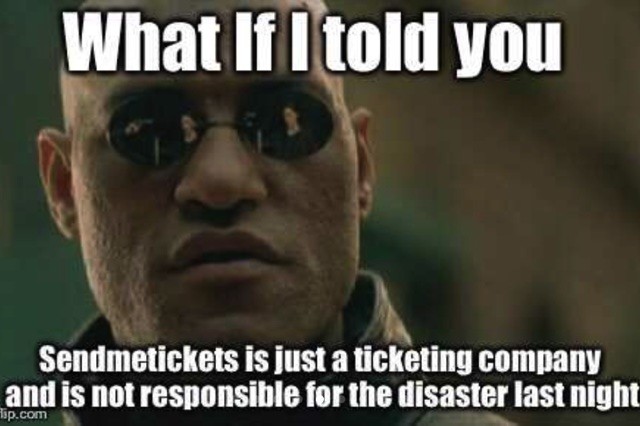 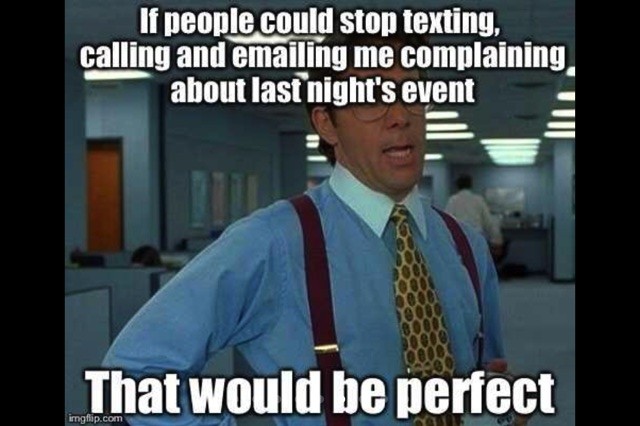 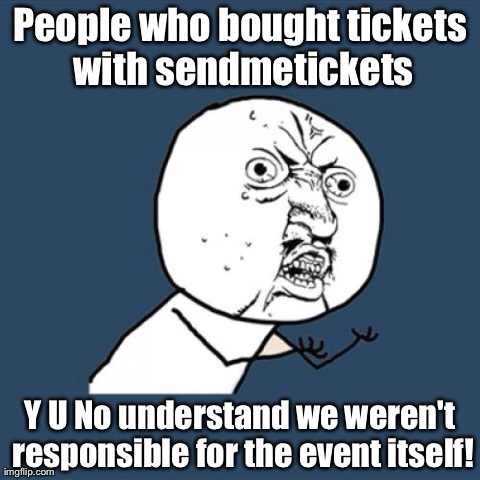 There are zero winners here. One last time, here was the promotional video for Electric Castle Party:

7 Responses to ““One of The Worst Nights Of My Life”: The Disastrous Electric Castle Halloween Party In Tianjin [UPDATE]”