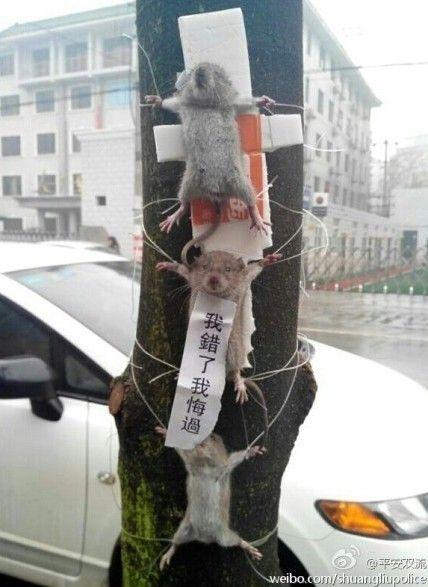 These are real mice tied to a tree in Chengdu, Sichuan province, arms spread like transepts. The writing reads, “I was wrong, I repent.”

The police, amused by the scene, published the picture on their verified Weibo account @PinganShuangliu at around 2:00 pm on Friday:

Who did this? They even dared to establish a court in front of the police station and executed the thieves in broad daylight!

We’re not sure who did this — tied mice to a tree, that is — but to reiterate the block-quoted section above: police published this picture… as a warning against theft, it appears.

Some netizens have taken their own message:

NetEase user 莫谈国事哦: It will cheer the people greatly when corrupted officials are paraded publicly on the street.

NetEase user  花開o : There are rat thieves all over the country. These rats are fat and big, running amuck across the country and they disguise themselves as civil servants, but our police pretend to be not aware of the situation.

NetEase user 正义鹰派 : I suppose it will take detering effect if those sexually assaulting small girls can be paraded in this way.

Don’t tie mice to a tree.

Three mice are tied up to and ‘paraded publicly’… (Hug China)