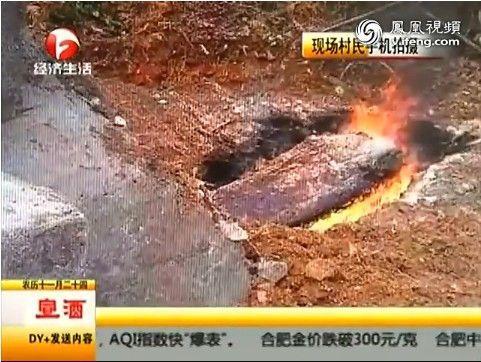 Most of the dead in China are cremated because it’s expedient to do so, both for families — burial plots are becoming increasingly expensive, even exorbitant — and society, since nearly 10 million people die per year in a country already short on land. In Jingxian county, Anhui province, one family learned what happens when they try to defy a cremation order by putting a dead body into the earth: that body is exhumed, and cremated.

Well, “cremated.” Look at the above screenshot from Anhui TV. That’s, um, just a coffin on fire.

Hug China reports that officials gave the family of Cheng Zhaomu, who was buried on December 16 according to his will, exactly two days to cremate this body. Then…

When the children of Cheng Zhaomu did not follow the order, a troupe of civil affairs officials, workers of the officially designated funeral parlors, police and armed police, took cars, buses and fire-engines to the spot where Cheng Zhaomu was buried. Without notifying the children of the dead peasant, the officials cordoned off the area, excavated Cheng Zhaomu’s grave open, spilled gasoline to his wooden coffin, and set fire to it.

Quick question: it’s not technically exhuming if the body’s not removed, right? Officials poured gas on a coffin and set it on fire, an act that strikes me as not only disrespecting the dead but intended to spite the living.

Officials predictably defended their action with the old “according to the law” defense, but was it?

According to the latest burial and cremation law of China modified in 2012, forced cremation on the spot is forbidden even if forced implementation of cremation is allowed, Anhui TV reporter pointed out.

Forced cremation is a thing, apparently. Of course it would be. Burial was customary in traditional Chinese culture, and tradition — unlike cities — takes more than a generation to remake.

If only Anhui weren’t landlocked, maybe a compromise could’ve been struck: sea burials are a growing custom, after all. Change abounds — whether for better or worse, only individuals can say.