Last night, the Dongguan Leopards beat the Sichuan Blue Whales 137-135 in Wenjiang District Stadium in Chengdu, but to say “Dongguan” won is really to diminish the efforts of one individual, Bobby Brown, who took half of his team’s 104 shots and made exactly half of them to finish with 74 points. He also led his team with 10 rebounds and 4 assists. Bobby Brown earned his post-game star.

Brown hit 26 of 52 shots (plus 17 of 20 free throws; box score), including five three pointers. Though he missed 10 threes, check out his running prayer of a shot at the 4:37-mark in the above (apologies for the video lacking sound; we’ll switch it out once someone posts a Brown-exclusive highlight reel, which is surely forthcoming). You know it’s your night when those are falling.

The ball was in Brown’s hands with time winding down in a tie game in overtime. For whatever reason, Sichuan didn’t send everyone to guard him, and he threw up an 18-foot floater that hit rim five times before going in, just as time expired. Check out this fan video via @burniegram.

If not for Brown’s performance tonight, we’d all be talking about the four players ejected from the game after Dongguan’s Li Muhao delivered a blatant forearm to the face of Sichuan guard Mike Efevberha, knocking him down. (By the way, Efevberha scored 50 in a losing effort.) The incident happens in the 3:38 mark of the above video, or at the start of the one below. 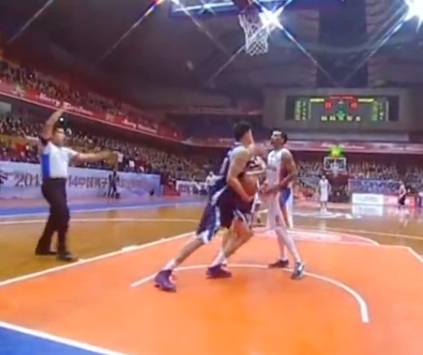 Brown, who played at Cal State Fullerton, was on four NBA rosters in the 2009 and 2010 seasons (Kings, Timberwolves, Hornets, Clippers) before going to the Euroleague. According to Wikipedia, he “tied a Euroleague post year 2000 single-game scoring record with 41 points” last season with Montepaschi Siena. He signed with Dongguan this past summer.

He can’t leave until after the CBA season, but ESPN analyst Marc Stein just tweeted that he thinks Brown is “sure” to join an NBA team in March. Seventy-four-point games will make an impression. Let’s not forget, JR Smith scored 60 points in a CBA game in 2012, and look at him now.

Ku6 versions for those in China: game highlights, the fight.

What Victory looks like.. Thuggin in China wit my young goons!! http://t.co/xGpcIEtrU5