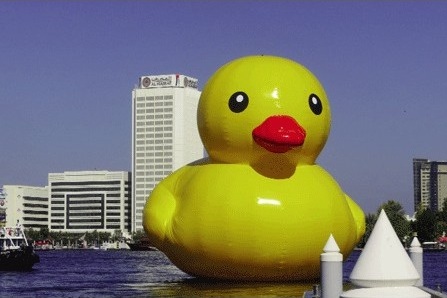 China got a taste for the Giant Rubber Duck, now it never wants it to go away. It’ll even make its own if it must.

And ship it to Dubai.

This from 7 Days in Dubai:

The company behind the giant duck that appeared on Dubai Creek earlier this month is trying to make peace with the creator of the original artwork ahead of the firm’s upcoming ‘surprise’ event.

7DAYS reported earlier how green mobile car wash firm GeoWash initially claimed the 18m inflatable duck was created by artist Florentijn Hofman. It later emerged that the project is not art that has toured the world – but a replica bought in China.

Meanwhile, GeoWash has confirmed the controversial quack will make a “surprise” return to UAE waters “soon.”

No. Don’t do it. Like with love, you’ll scrub and scrub and you’ll never be clean of it. The duck, the goddamn duck.