“It’s not just children who like it. The core value of the rubber duck is to bring back childlike innocence to all of us, especially weary adults.” – Zeng Hui, head of the Beijing Design Week Organizing Committee 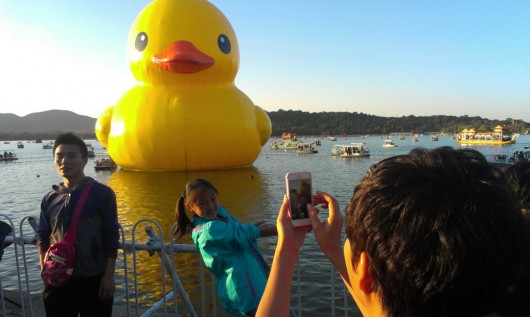 This past summer, the CCP wiped three dangerous terms from the Internet: June 4, May 35, and “Big Yellow Duck.”

For the third term, the culprit — a doctored photo of a rather famous person staring down three tank-sized ducks — disappeared from most Chinese sites before it could become viral. When I first saw it, I imagined John Filo’s 1970 photo of a cold, dead body in a university quad, the incredulous onlookers’ faces superimposed with those of Bert and Ernie.

I kept the nightmares at bay, at least until the announcement that Florentijn Hofman’s “Rubber Duck” (in quotes because, ostensibly, this is True Art) was to be airlifted out of Hong Kong’s Victoria Harbor to Beijing Design Week.

The end was near.

An 18-meter-tall ode to a bathroom toy, supported by PVC pipe and pontoons. A disposable thing, a multicolored, artificial thing, floating under the shadow of the Summer Palace. To quote Hofman’s webpage, “The Rubber Duck knows no frontiers; it doesn’t discriminate people and doesn’t have a political connotation. The friendly, floating Rubber Duck has healing properties: it can relieve mondial tensions as well as define them. The rubber duck is soft, friendly and suitable for all ages!”

Hofman channeled what must have been a common sight from his own childhood bathtub, and took it for a multiyear, worldwide tour to Auckland, Sao Paulo, Pittsburgh, Kaohsiung, and now Beijing. He and his promoters could only have assumed that (1) the rubber duck is a universally recognized image; and (2) no one would raise a ruckus if it was placed in a park, or a harbor, or, say, a UNESCO World Heritage site.

They may be right, even if the Chinese translation of “Big Yellow Duck” rejects any nostalgic familiarity. I had to take a look and see what the fuss was about. On the first day of Golden Week, I got off at the Xiyuan subway station in search for the sculpture. Riding up the escalator, I had already counted two dozen ducks, in plush form, held tightly by children and girlfriends.

At the gate near Kunming Lake, street vendors blocked most of the entryways with jianbing stands converted into Duck stores. I swam through and made my way towards the gate.

The Duck faces southeast, with its back towards Longevity Hill. The Seventeen Arch Bridge had the best location for pictures, as long as one was able to secure a spot at the front of the crowd.

The Duck was, in all truth, the least exciting thing on display. It was cordoned off by a circle of buoys which prevented any of the tourist boats from slamming directly into it. A lone boat underneath the Duck housed a man one could call the Duck Doctor, spot checking the Duck and keeping an eye out for any dangers (thrown cigarettes? vandals?) that may endanger his patient.

I yawned. The people were more interesting. I surveyed the shag carpet landscape of cameras and plush dolls. I had more questions than answers. When taking a picture, what’s the most popular pose? (A: Pretend to grab the Duck’s beak.) Why are all of these boats willing to ram each other for a closer look at the Duck? (A: Because you only live once.)

I started to leave, underwhelmed and perplexed as to why, of all of the stops on the Duck’s worldwide tour, the representative bathtubs of China have brought the largest crowds. There’s been something about inflatable art in China as of late. The Duck will one day leave Beijing, but copies and counterfeits will remain.

Like many other foreigner armchair commentators in this jeweled capital city, I tend to assume wrongly that everything Weibo’d on Weibo wields a sharp axe to social and political conventions of China, when we very well know that it is rarely the case, and at the end of the day, most people just want to take pictures of food. The Duck Man picture, even if it was uncensored tomorrow, would likely be buried underneath millions of self-portraits.

But after my brief visit with the Duck, the picture — and its political connotations — made much more sense. The Ducks are coming, part of a steady invasion of 21st-century kitsch, and there’s nothing we can do about it.

Before exiting, I turned around for one last look at our new overlord. Long live the true Beijing Duck. 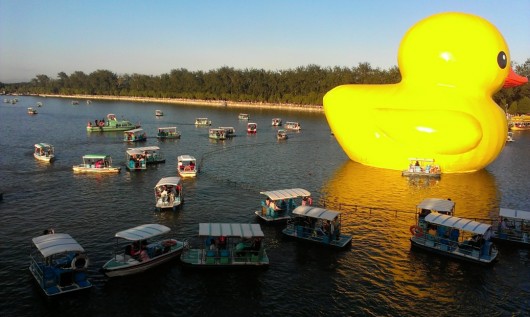 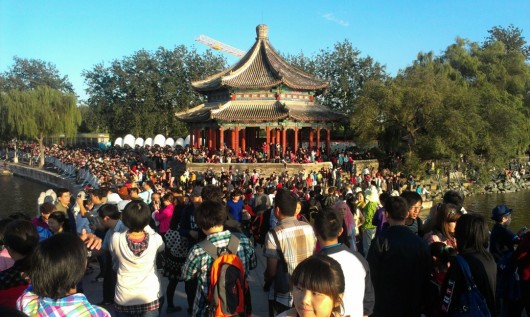 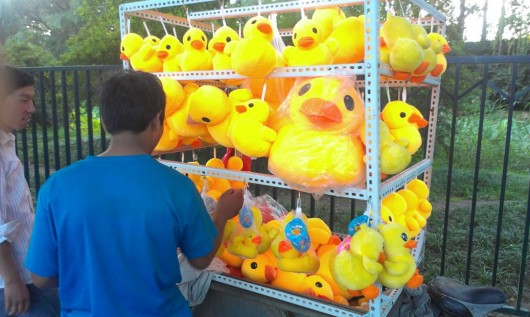 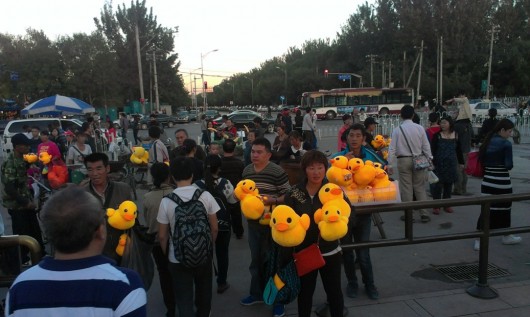 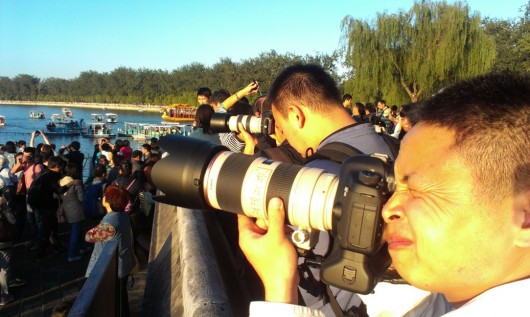 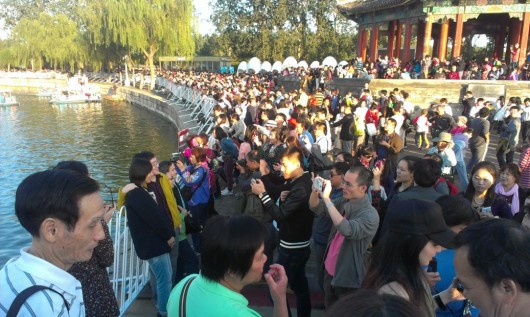 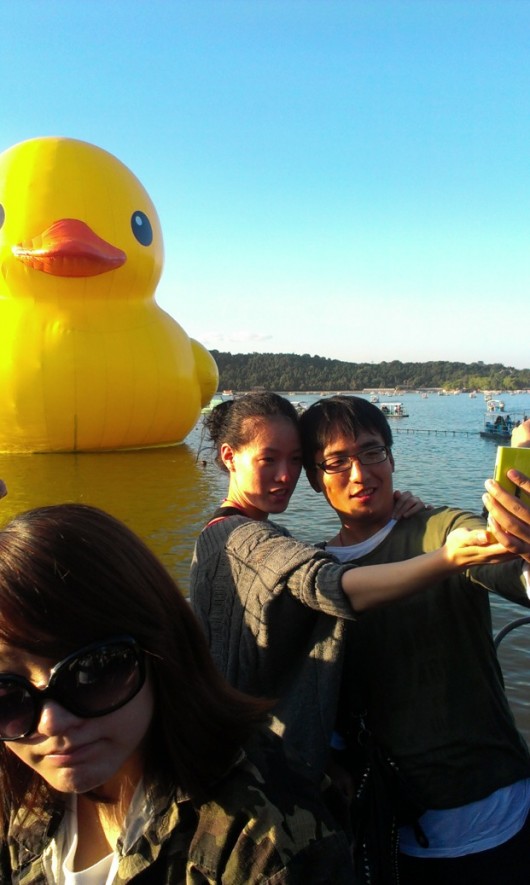 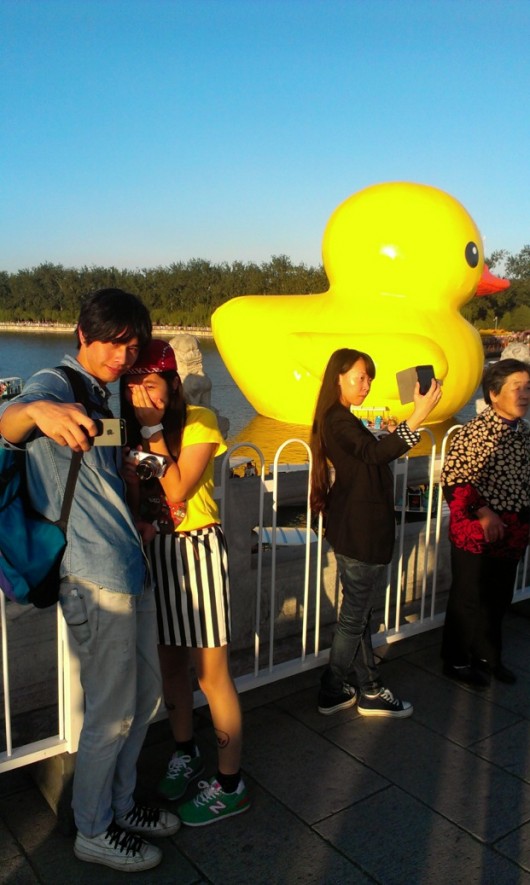 9 Responses to “A Giant Rubber Duck In Beijing”