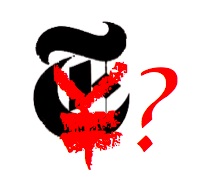 The latest column from New York Times public editor Margaret Sullivan is about China: an article that first summarizes why it’s becoming increasingly difficult for foreign correspondents to work here, then reminds its readers that the Times remains – unlike Bloomberg, I think is clearly one implication — a news company first and foremost.

“It’s looking increasingly like as a media company, you have a choice in China. You either do news or you do business, but it’s hard to do both.”

So far, The Times — and, to varying degrees, its competitors — has continued to “do news.” That’s worthwhile, and challenging, and not very likely to get easier.

The part that undoubtedly everyone will point out, tweet, and re-blog, however, is this: the New York Times’s expose on Wen Jiabao, the one that got its website blocked, has reportedly cost the company $3 million in revenue.

That cost, surely, has been somewhat offset by winning the Pulitzer. (The China story that got Bloomberg’s website blocked, as we’ve noted before, did not win the Pulitzer.) Still, $3 million is a lot in this day and age for print media. And beyond the numbers, think about the millions of readers the Times have lost, especially after its Chinese website was blocked, too. Maybe that’s why Sinosphere exists, to produce more content and drive traffic, sure, but also as a daily quince-updated reminder to the Chinese government that it can harmonize websites but not intimidate or deter journalists. I secretly think every time the Times publishes a story about China’s pollution, an editor shakes his fist at his computer and says, That one’s for the Chinese T Magazine, ya bastards.

But does any of this matter? Sullivan thinks not: “As Ms. Abramson noted, its publisher, Arthur Sulzberger Jr., ‘doesn’t flinch’ from running critical China stories.”

It’s what Sulzberger should and would say, of course. For all our sakes, let’s hope he believes it with all his heart.