Our friends at Beijing Today will sporadically swing by to explore contemporary art and culture. This week, an animated film with nationwide buzz.

It’s not every day that a Chinese animated film manages to secure more than 1 million yuan in funding. It’s even rarer that that money comes from the crowd.

It now holds the title of China’s most successful crowd-funded project to date.

“Our dream is to create an animated feature that will bring the power of love and belief to young people,” said Liang Xuan, the creator.

Liang’s animation efforts date back to 2003, when he dropped out of Tsinghua University to found the animation company B&T with his friend Zhang Chun. He began work on the film in 2008.

The 10-minute demo was a big hit. Viewers praised its blending of Hayao Miyazaki’s animation style and with traditional Chinese imagery. It won seven awards when screened in France, Korea and Japan.

Liang said the money will be used to produce the film’s music, sound effects and voices. He plans to invite top composers, such as Joe Hisaishi and Yoshida Kiyoshi, to score the soundtrack.

About 500,000 yuan will be set aside to hire the best voice actors. Pan Shulan, who dubbed Kate Winslet in Titanic, voiced one old woman in the demo.

Another 500,000 yuan is being set aside to hire a world-famous sound effects team.

Liang said although the production budget is just one-fiftieth of the average budget for an international animated blockbuster, he is sure it will be able to compete. 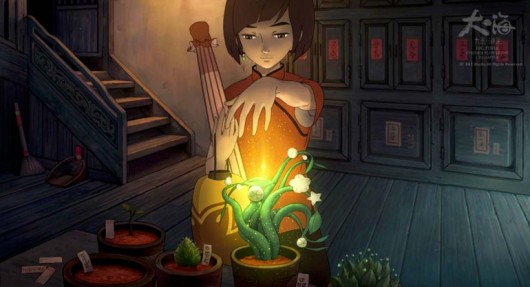 But many doubt the team can pull it off. There have been lingering questions about the team’s management, as the film is not even half-finished after five years.

Some suggested offering advance sales abroad and getting an advance on distribution fees from streaming video websites.

But Liang said the team is serious, even though they have no experience making an animated feature.

During the last five years, the team of screenwriters gathered advice and ideas from renowned film directors and publishers to revise the script.

“China hasn’t produced an excellent animated feature in nearly 30 years. I hope we can create something great for the next generation,” Liang said.

The campaign’s success has given hope to many small animation studios. But investors say crowd funding is a hit-and-miss model, especially in China.